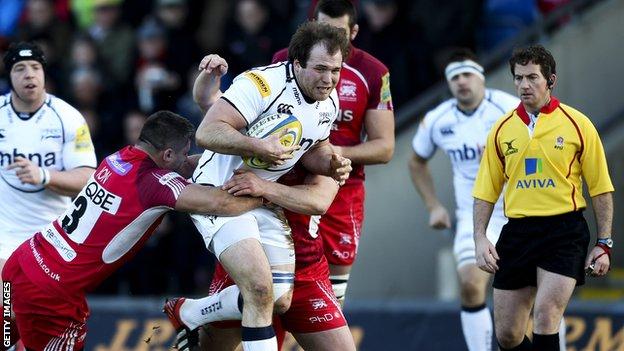 Henry Thomas hopes a good start to the Premiership campaign with Sale Sharks will result in more international recognition with England this season.

The prop in June, but was not included in Stuart Lancaster's Elite squad last month.

"The root of it is playing for Sale and that's where I'll get my rewards from," Thomas, 21, told BBC Radio Manchester.

"If that goes well, there's the autumn internationals and the Six Nations."

Thomas, who was involved in England's 2013 Six Nations squad but had to wait until the summer for his international debut, continued: "The goals I set for the [Argentina] tour were winning two caps, so it was mission accomplished.

"There are aspects of my game that I need to work on and I'll try to make an impact at another time.

"It was good to integrate with the guys. Everyone knew it was a new group and a lot of guys were away being rested for the Lions tour.

so it's up to me to push at the start of the year and try to get a spot in another squad."

Thomas impressed during a miserable 2012-13 season for Sale, during which the Sharks had three directors of rugby and only guaranteed survival in the closing weeks of the campaign.

As well as Thomas, the performances of fellow 21-year-olds were rare highlights, and the young trio of front-rowers are likely to be involved in Sale's opening league fixture of the season against Gloucester at Kingsholm on Saturday.

Thomas added: "It's credit to the management trusting in those guys. Sometimes you have no option with a few injuries and I imagine that's how all three of us have got our shots over the years.

"Last year when we were having a tough time, those guys really stood out and there's definitely more to come from them this year."