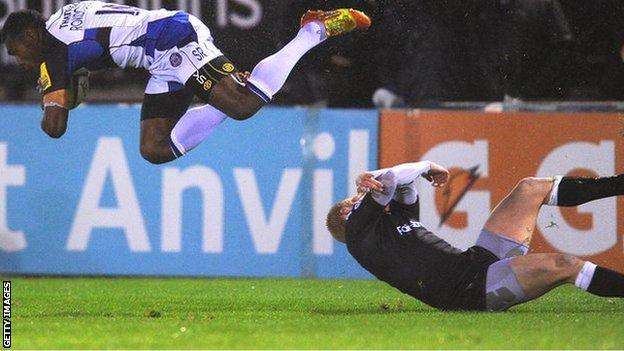 Bath defied driving rain in the North East to ruin the Premiership return of Dean Richards after a four-year absence from the English top flight.

The Newcastle boss was banned from coaching for three years for his role in Harlequins' fake blood scandal.

Prop Anthony Perenise then burrowed over for a try and a penalty try capped a powerful Bath display.

Bath opened last season with victory at Worcester, but it proved to be their only win on the road throughout the Premiership campaign.

Ford, making his Bath debut along with centre Jonathan Joseph and full-back Anthony Watson, kicked the visitors into a seventh-minute lead, before play was held up after Newcastle's Jamie Helleur suffered a serious-looking injury as he tried to tackle a rampaging Matt Banahan.

There was a six-minute delay to allow Helleur to be strapped to a stretcher and carried from the field, with Adam Powell brought on as a replacement.

Ford's long-range kick into the driving rain three minutes before the break ensured the visitors had a 6-0 half-time lead, while an injury to Kyle Eastmond just before the interval saw summer signing Gavin Henson brought off the replacements' bench for his debut.

Newcastle looked much brighter after the interval, but a break upfield from a scrum after Andy Saull had opened up Bath's defence came to halt as a pass to Danny Barnes went to ground.

Despite the poor conditions, Ford's kicking remained exemplary and he landed his third penalty from three attempts - this time from 28 yards.

Bath finally crossed the line after man of the match Dave Attwood, continuing his fine form from last season, won a line-out and Samoa prop Perenise exploded out of a driving maul to increase the lead.

Former Leicester stand-off Ford's conversion hit the upright but he added the extras when the visitors' power earned them a late penalty try.

"We got ourselves into the right positions at times but we managed to shoot ourselves in the foot on occasions, but it's something we will take heart from.

"We just need to be a bit more clinical in what we do. The first half we didn't take our chances and they went in with points up.

"We didn't have quite the unity of turnovers as we would have hoped and we didn't capitalise on having the elements with us and playing in the right areas as we should have done."

"It's always tough up here and playing in the wind in the first half to go in at 6-0 was a great result for us.

"With them having one chance at goal but not threatening our line at all was good. We just talked about in the second half showing some resolve and some resilience and I think we did all of those things.

"It was freezing for both teams out there but we dominated in the forwards, so it's pleasing to get the 21 points and it was pleasing that we didn't concede any."