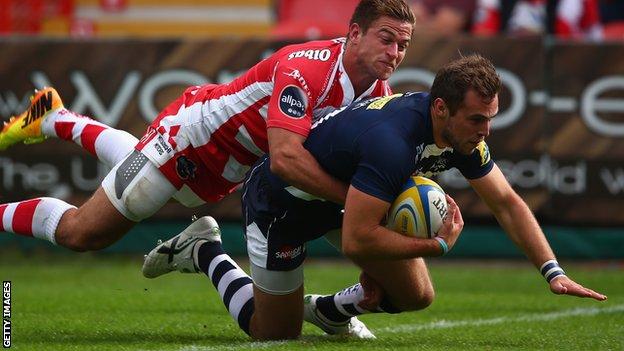 Sale produced a fine performance to shock Gloucester at Kingsholm and get their Premiership campaign off to a winning start.

Mark Cueto's try and penalties from Nick Macleod and Tom Arscott helped the Sharks to a 14-3 half-time advantage.

Andy Forsyth touched down after the break to extend the lead to 16, before Henry Trinder's try for Gloucester.

Victory over Gloucester marked Sale's first opening day win in three years, having beaten Newcastle 35-18 in 2010. The last time the Sharks were victorious playing away in their first Premiership fixture was in 2008, when they also triumphed over the Falcons.

Gloucester, who had not won on the opening day since 2009, found themselves behind early on thanks to MacLeod's penalty from close range.

Cueto then increased the visitors' lead with the first try of the match, the 33-year-old crossing on the right after a slick move had left the Cherry and Whites outnumbered in defence. MacLeod was unable to add the conversion.

Burns' kick reduced the arrears but Arscott struck two huge penalties from near halfway, either side of Gloucester's Nick Wood being sin-binned for an infringement in a ruck, to keep them comfortably ahead at the interval.

Sale started the second half like they began the first, Forsyth latching onto Cueto's dink through to touch down - though the try was only confirmed by the Television Match Official, despite suggestions that Forsyth may have been offside.

But, despite Billy Twelvetrees seeing yellow for twisting Cueto over in a tip-tackle, the home side were not finished and Trinder ran in from 25 metres to go over under the posts and, having converted, Burns gave them further hope with three successive penalties.

However, Ford's drop-goal settled any Sale nerves and the visitors completed an eye-catching opening victory.

"There were moments in our game when we creaked and didn't really give us control of that match. Both line-out and scrum were poor in terms of us getting our game moving from that starting point.

"At the end of the day, there were other areas - game management and the contact area - where we came second best and fundamental to our performance was the set-piece, which we have to get right.

"I don't think we deserved to win it. We didn't have enough control of the game. The thing we have to do is lick our wounds a little bit. We are wounded, we are humiliated but that is the nature of the sport we are in.

"It is the last thing we would want here at Kingsholm."

"Last year is another season. The year before, we got to the Heineken Cup and nobody talks about that, do they? There is no point bringing that one up.

"We are at Kingsholm today, for goodness sake, and Gloucester came out with a real passionate second half and took the game to us. We held on in the second half but that is the character we showed in the latter half of last year, where we won seven or eight of the games we played.

"We have now come down here and, if you get a bonus point, you are happy, so to win is a great result for the club."