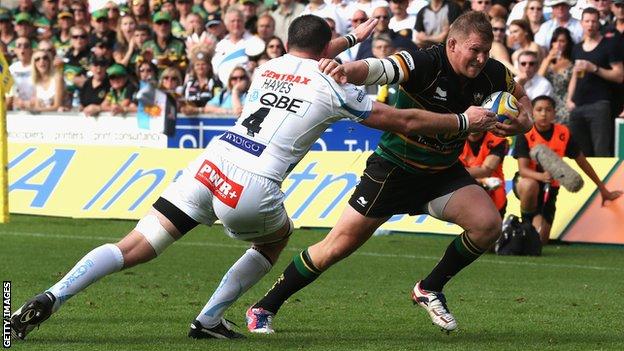 Northampton spelled out their Premiership title credentials with an emphatic opening victory over Exeter.

The home side had the bonus point in the bag by half-time, with Dylan Hartley the first to cross early on.

Saints led 31-6 at the break through tries from Ken and George Pisi, either side of a Tom Wood effort and 11 points from Stephen Myler's deadly boot.

In the second half, visiting captain Dean Mumm reduced the deficit before replacement Samu Manoa crossed late on.

Northampton underlined their billing as title contenders by blowing away the visiting Chiefs in a clinical first-half display. And, though Exeter were without several of their summer signings through injury, they were simply unable to live with the power and pace of the home team.

I thought he was magnificent today. There has been a lot of talk about him after what happened, but all he can do is play and show what he can do on the field

It took Saints just five minutes to open their account, when centre Luther Burrell's long pass found Hartley waiting out on the wing and the England man squeezed over in the corner.

Stephen Myler added the extras from the touchline to begin what was to be a faultless kicking display from the fly-half.

Even a yellow card for Phil Dowson for a professional foul failed to slow Northampton as Ken Pisi crossed, Burrell again the provider.

A speculative Ben Foden up and under then bounced kindly into the arms of Wood and, after Phil Dollman failed to deal with it, the flanker charged through to touch down.

Wales winger George North was the architect of the bonus-point try with just 36 minutes on the clock, launching an attack before releasing George Pisi to finish.

By contrast, all a shell-shocked Exeter had to show for their efforts at the interval were two penalties from Gareth Steenson.

The second half was a much more even affair but the damage was already done as far as the Chiefs were concerned.

Despite a second yellow card, this time for a dangerous tackle by Courtney Lawes, Exeter could only breach the Saints defence once, Australia international Mumm the man to wriggle over.

But it was Northampton who had the final word, underlining their supremacy by driving replacement flanker Manoa over the line to complete a fine start to the season.

"I thought he was magnificent today. Dylan put in a determined performance today. There has been a lot of talk about him after what happened [he was sent off in last season's Premiership final defeat by Leicester], but all he can do is play and show what he can do on the field.

"At half-time when we looked at the stats it showed he had covered the most metres in our team.

"He has worked very hard during the summer, he has had no pre-season games, so to come in and play like that shows what sort of player he is. He is our leader because he plays and leads by example."

"In the first half it felt like we were going through the motions, and the reality is you have to do a lot more than that against a top side.

"You have to have flat-out commitment and that wasn't there in the first half.

"What I have got to do is find out why we were off the pace at the start of the game and how to get us firing again."