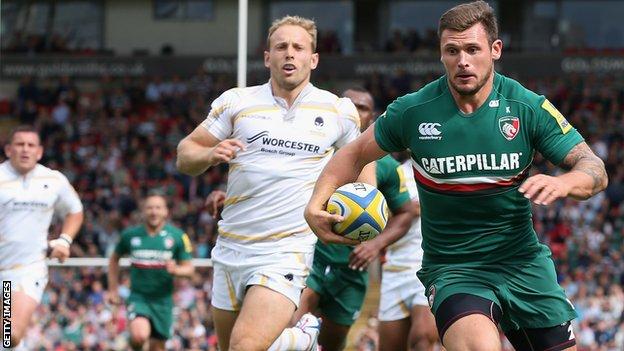 Leicester Tigers launched their Premiership title defence with a bonus-point win at home to Worcester.

Adam Thompstone and David Mele both ran in tries at Welford Road as the hosts raced into a 18-3 lead at the break.

Worcester had Mike Williams sin-binned early in the second half before Jordan Crane touched down to increase the Tigers' lead to 22 points.

Chris Jones and Josh Matavesi both went over for the Warriors before Niki Goneva's try secured a bonus point.

Without a win in 11 visits to Welford Road, it was actually Worcester who had the first opportunity to put points on the board but Ignacio Mieres dragged his early 30-metre penalty wide.

Worcester have still not won away from home in the Premiership since New Year's Day 2012, when two Joe Carlisle penalties helped them to a 6-0 win against Wasps.

The visitors then found themselves behind just two minutes later when Lamb kicked with greater accuracy from a similar distance - and the opening try was soon to follow.

Niall Morris's dink through after a successful line-out found Thompstone and the 26-year-old winger went over in the corner to score.

Mieres and Lamb traded long-range penalties, before the Tigers' extra quality again told when Mele latched onto Crane's smart pass to touch down between the posts, Lamb kicking a routine conversion to give the Tigers a 15-point half-time advantage.

Worcester's task became even harder right at the start of the second period when Williams was yellow carded for a block on Lamb, and the hosts quickly made their numerical advantage count.

Crane bundled his way over following a driving maul and Lamb was again on hand to successfully add the extras.

However, upon Williams' return to the field Worcester fought back, replacement lock forward Jones and Matavesi both forcing their way through to score, cutting the deficit to 10.

The visitors continued to threaten but Goneva produced a fine solo effort in the final minute to go over for Leicester's fourth try, replacement Owen Williams converting to apply further gloss to the scoreline.

"When you play at home to Worcester - and no disrespect to them - everyone expects you to get a bonus point.

"Is it a point lost if you don't get a bonus point? Worcester made it difficult for us. They are a good side, they are coached well and they will cause teams a lot of problems this season.

"I am very happy with the bonus point but I am disappointed with our performance at times in the second half.

"But it's our first hit-out and we will look at it and put it right for the trip to Bath."

"At half-time I said let's be more direct and get field position and we will get something out of it, and we did.

"Halfway through the game we could have crawled under a rock and got a good beating. But we didn't. We came back and their 10-point lead looked pretty fragile for a while.

"I am looking for character and behaviours that will underpin the club for a two-year period and that second half was a great start. I am really proud of the guys.

"We are not a Leicester squad. We don't roll internationals off the bench. But I think we are a courageous squad and we will work really hard, which was illustrated today."