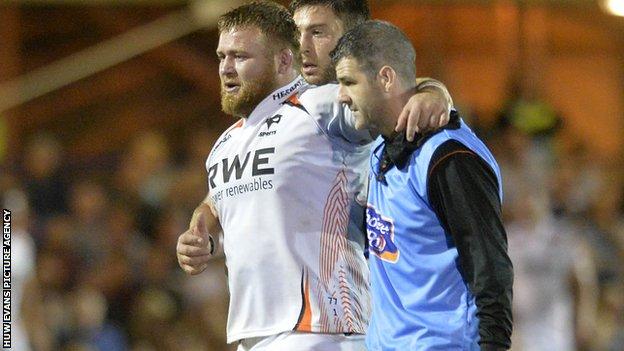 Ospreys Prop Dmitri Arhip has been ruled out for up to six months after rupturing his Achilles tendon in the pre-season defeat to Bath.

The Moldovan left the Recreation Ground on crutches on Friday night.

Arhip, 24, has made nine appearances for the Ospreys and signed a new contract in May.

"At this stage we are expecting a lengthy lay-off that could keep him out for up to six months," said Ospreys head physio, Chris Towers.

"We are going through the usual process of carrying out all investigations and meeting with specialists to ensure the best management going forward, and will update accordingly as appropriate."

Arhip can play anywhere across the front-row and made his debut for the region off the bench at the Liberty in a Pro12 win over Cardiff Blues at the end of November.

He made his Heineken Cup bow coming a week later away to European giants Toulouse, scoring his first try in the win over the Dragons in March