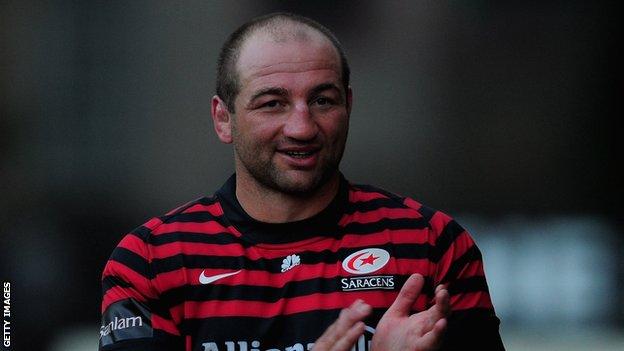 Saracens captain Steve Borthwick says the side must adopt a hard-work ethic to have success in the Premiership.

The Allianz Park outfit finished top of the table last season but were beaten in the semi-finals.

The 33-year-old told BBC London 94.9: "We will have to continue to work exceptionally hard, learn and be the best players we can be.

"We will need to bring the intensity that we want to be known for to every training session and every game."

He continued: "We were very disappointed with the way the season ended last year and I think this year we will be stronger.

"We are a stronger squad and we are looking to learn lessons, improve and be better moving forward.

"Pre-season has gone very well but you get to this point in time and you want to get the season started and the real competitive games underway."

Sarries have brought in prop James Johnston (Harlequins), number eight Billy Vunipola (Wasps),prop Richard Barrington (Jersey) and centre Tim Streather (Nottingham) over the summer, and Borthwick is pleased with the additions to the squad.

"Our new players have integrated tremendously well, our internationals have returned and everyone is raring to go," Borthwick continued.

"They are fantastic guys who have come in and worked exceptionally hard. That is the first thing you have to do as you have got to show how hard you are willing to work for the group.

"That is how you earn respect and I think the guys have done that."

This season will see the introduction of new laws for the scrum, with a three-stage engagement sequence and scrum-halves instructed to feed the ball straight into the tunnel.

Leicester director of rugby Richard Cockerill has criticised their introduction without the consultation of Premiership coaches, while former England hooker Brian Moore argues they are for the benefit of the game.

Second-row forward Borthwick, who won 57 caps for England, expects it may take time for the new laws to bed in.

"There is going to be a period of adaption both for players and referees," he reasoned. "That is the period we are going through now.

"On the opening day of the season, is everything going to be perfect? Probably not. But over a period of time people will adapt to it and get used to it. Hopefully it will be a success as the season goes ahead."

Saracens begin their campaign against London Irish at Twickenham on Saturday.