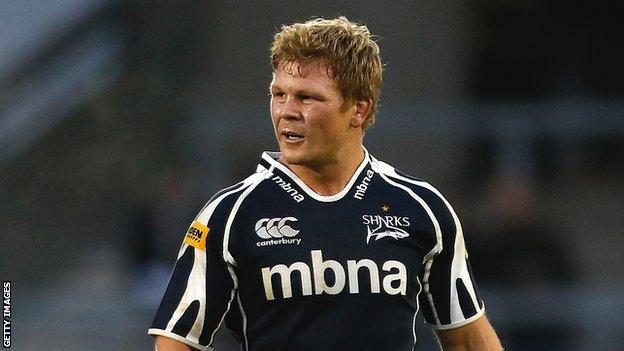 Dan Braid says he has received nothing but support from his predecessor Dave Seymour after being announced as the new captain of Sale Sharks.

Seymour before being replaced as skipper by the 32-year-old back-row forward, who has six caps for New Zealand.

"Dave was the first one to come up and shake my hand after it was announced," Braid told BBC Radio Manchester.

"He hasn't changed what he does. He's still vocal and leads by example."

Director of rugby Steve Diamond described Braid, who as a "natural leader" when last month.

"It is a great honour," said Braid. "It's nice to be appreciated like that. When 'Dimes' spoke to me about it, I said 'yes' straight away because I know what I can offer in the role.

"But it's great having guys in the side that have had the experience [of captaincy]. It's so important because it can't just be one guy leading the way. You need as big a group as possible trying to drive standards and drive everything forward."

at the Salford City Stadium and Braid says they have all settled in well ahead of their Premiership opener against Gloucester at Kingsholm on Saturday.

He continued: "There's a good core group of guys that have come up from London Welsh together and it's good they know each other, but everyone has fitted in really well and shown some good form in the pre-season games.

"We've set targets and we've got to be realistic after where we were last season [Sale recovered from a miserable start to finish 10th].

"We're really going for that top six and trying to get into the top European competition next season."