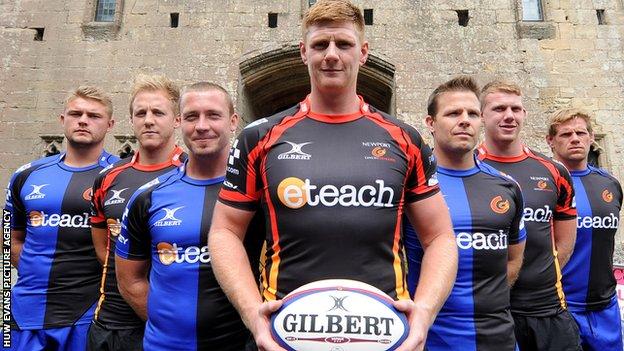 Captain Andrew Coombs hopes the new coaching team at the Dragons can put an end to "below standard rugby" dished up by the team last season.

Lyn Jones, a former Ospreys and London Welsh coach, is now in charge, with former Wales captain Kingsley Jones as his assistant.

Dragons open their Pro12 campaign against Ulster in Newport on Friday.

It's been tough for the fans, watching below standard rugby last season, but we have changed as a squad and we are looking to put things right on the field this season.

"It's been tough for the fans, watching below standard rugby last season," said back rower Coombs.

"We have seen massive changes here at the Dragons.

"The experience of Lyn and Kingsley coming in has helped us massively, with the youngsters learning so much from them.

"We have new players like Rhys Thomas and Richie Rees just bring so much experience to this environment and that is brilliant to have."

British and Irish Lions number eight Toby Faletau will not play in the opener, but Fiji back-row Netani Talei is set to make his debut, as are fly half Kris Burton, scrum half Rees and hooker Rhys Thomas.

After a disappointing 11th place finish in last season's Pro12, having recorded only six wins throughout the campaign, Coombs says the Dragons are determined to make a statement this season.

"We let ourselves down last season at Rodney Parade," said Coombs.

"We let the fans down a little bit too. We are confident we can stop teams coming here and rolling us over."

The Dragons face a Ulster side which finished runners up in last season's Pro12 but will be without Lions duo Tommy Bowe and Rory Best, while Ruan Pienaar is on South Africa duty, while John Afoa is injured and back row Nick Williams is also an absentee.

"We have to target a win and we cannot settle for anything less," said Coombs.

"It's a huge challenge to see how far we have come as a young squad in such a short time, but we are looking forward to the opportunity to play Ulster."