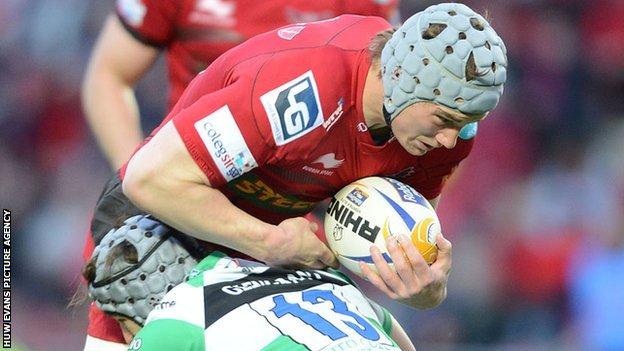 Scarlets captain Jonathan Davies says he is happy to stay with the region as long as their ambition matches his own.

The British and Irish Lions centre's contract expires at the end of this season, sparking fears he will follow George North out of the Welsh game.

But Davies, 25, says his main ambition is to be successful on the field.

"Personally I want to be competing and as long as the Scarlets' ambitions are the same, I'll be more than happy to stay," he said.

"I've been fortunate with Wales to be playing in big competitions and big games and I've said before you get a taste for that success - you want more of it.

Speaking to the Sport Wales programme, broadcast on Thursday, he added: "At the end of the day you play rugby to win games.

"You hear the boys talking about new experience and change of life, but for me I play rugby to win games and that's what I want to do this season and for the rest of my career."

The Scarlets reached the semi-final of the RaboDirect Pro12 in 2012-13, but were beaten heavily by Ulster in Belfast.

That match was North's last for the region before he joined Northampton Saints, while Dan Lydiate (Dragons) and Jamie Roberts (Blues) also left Wales to play for Racing Metro in France.

The four Welsh regions, which came into being 10 years ago this month, have struggled to match the funding of the big French and English clubs, and operate a strict salary cap.

Davies has won 36 caps for Wales and was at the centre of a major controversy when he was selected for the Lions ahead of Brian O'Driscoll for the third and decisive Test match against Australia in July.

But he played a key role in the record 41-16 win over the Wallabies and had more game time than any other member of the touring party.

He says he is resigned to fielding questions about his future - along with several other high-profile Welsh players.

"It's always going to be one people want to talk about with the amount of boys in the Welsh squad who are out of contract," he said.

Davies will not play in the Scarlets' opening game of the new Pro12 season when they take on defending champions Leinster on Friday.

He is one of seven Welsh Lions being rested for the first round of matches.

Sport Wales is on BBC Two Wales at 19:00 BST on Thursday, 5 September and afterwards on iPlayer.