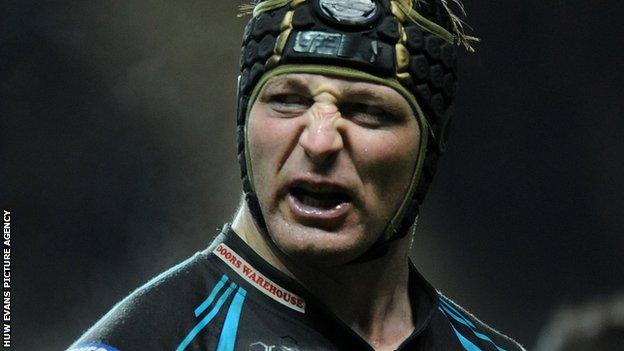 Former Wales lock Ian Gough says he is leaving the Ospreys after six years with the region.

The 36-year-old forward, who earned 64 Welsh caps, is now free to pursue other career options.

Gough made 119 Ospreys appearances since signing in the summer of 2007.

"With sadness it's time to announce that I am leaving the Ospreys by mutual consent. I have been at the region since 2007 and have enjoyed every minute of my time here," Gough said.

"The welcome I had and the friends and memories I have made will stay with me forever.

"I've enjoyed on-field success with the team, winning trophies, and have also been lucky enough to help with coaching the young regional age grade players.

"I consider Swansea my home now. I wish everyone at the region the best of luck for the future and look forward to watching you play and enjoying a few beers with friends there when able."

Gough has been one of rugby's stalwarts during a lengthy career that began back in the 1990s.

The second row made his Wales debut against South Africa in 1998 and was a member of the Welsh squad which won Grand Slams in 2005 and 2008.

His last cap was the 16-16 draw against Fiji in 2010 and he was overlooked by Wales for the World Cup in New Zealand.

With 92 games for the Dragons before moving to the Ospreys, he has made a total of 211 regional rugby appearances since 2003, second only behind fellow lock Adam Jones (Dragons) with 228.