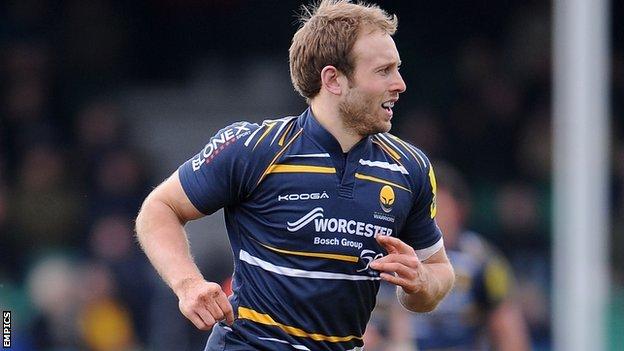 While 13 new signings have come in, some of Worcester's biggest names are among the 14 to have moved on.

"It could be the difference between finishing where we did and pushing for a Heineken Cup place. There's no egos."

The dressing room at Sixways has been shorn of big characters such as Craig Gillies, Shaun Perry and Tevita Taumoepeau, who have all retired.

Ins and outs at Junction 6

But Dean Ryan's potentially key signing of former Wales flanker Jonathan Thomas (who will captain the Warriors, as he once captained his country) followed the arrival of a glut of players signed by former coach Richard Hill prior to his April departure,

"There's been a lot of changes on the playing side. But all the guys get on well," insists Pennell.

"It's difficult to quantify, but there's a different atmosphere.

"It can make the difference in those tight games," adds the 26-year-old utility back.

"Maybe if we'd had the togetherness and unity that we have now, we might have been able to close games out better.

"The guys might be able to dig that deeper and found that extra couple of percent when it really counts as they're doing it for their team-mates and their friends."

That would certainly be welcome news to Warriors fans used to seeing too many winning positions slip away.

If Richard Hill's side had not been denied victory by last-minute penalties in both their first two home matches, last season could have told a different story.

And the other main thing the Warriors have to put right if they are to seriously challenge for a top-eight Heineken Cup finish, or even a place in the play-offs, is their woeful away record.

They failed to win any of their 11 away league matches last season and have not, in fact, won on their travels in the Premiership since a 6-0 win at Wasps on New Year's Day 2012.

Now they find themselves up against champions Leicester to kick off the new season at Welford Road this Sunday (8 September, 14:00 BST), but Pennell sees that as a great challenge.

"It's never an easy time to play Leicester," he added. "But it's also a great opportunity for us to lay down a marker for the season.

"It's a chance to put behind our away form that we've struggled with.

"New start, new team. Why not go to Welford Road and upset the champions?"

Worcester were outscored five tries to two on their last visit, a year to the day on Sunday.

And this season's opener will be an interesting gauge for the new-look Warriors (who will have five of their debutants in their starting line-up) as to how the 2013-14 campaign will unfold under Ryan.

"There's no preconceptions as far as Dean Ryan's concerned. Everyone's got an opportunity. 23 jerseys to fight for every week.

"We're all ambitious pushing towards the same targets.

"The ball's in our court and, as a group of players, it's up to us what we do with it."