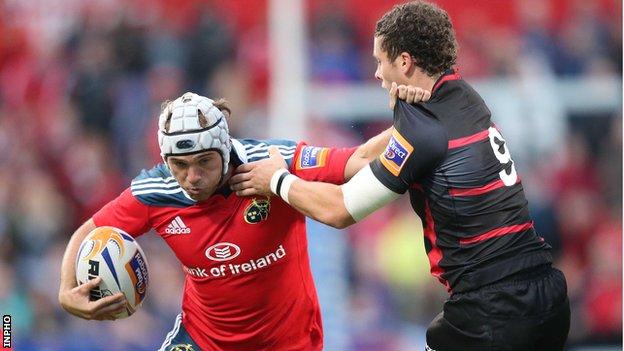 Munster secured a bonus-point win over an under-strength Edinburgh in the Pro12 opener at Musgrave Park.

Tries from Denis Hurley, James Coughlan and new prop James Cronin helped the hosts to a 22-6 lead at half-time.

A Nick De Luca try raised hopes of a comeback and while Ivan Dineen grabbed Munster's fourth try, the Scots remained competitive throughout.

Munster were first to threaten with ball in hand, Cronin getting involved twice on his first senior start before Johne Murphy almost put man-of-the-match Ian Keatley over to the right of the posts.

But Munster tore ahead with two tries in the space of three minutes. Keatley conjured up the opener, slicing into the 22 and passing wide for full-back Hurley who managed to stretch over past Dougie Fife and Sean Cox.

After Keatley missed the conversion from wide out, Murphy gobbled up the restart to set up another high-tempo raid.

There were some nice touches from Murphy and Duncan Williams before a touch of good fortune set up the second try - Murphy's dinked kick was flicked up by Ronan O'Mahony's right heel, allowing the onrushing Coughlan to finish neatly in the right corner.

Keatley added the extras this time and he nailed a long-range penalty entering the second quarter, with Edinburgh falling 12 points behind.

Francis steadied them with his second three-pointer, only for winger Lee Jones to needlessly tackle Coughlan in the air near halfway and earn himself a yellow card.

Keatley missed the resulting penalty from a difficult position on the right, but Munster quickly resumed on the offensive with Casey Laulala starring with his quick-witted offloads.

The province relied on brute force for their next try. Coughlan was stopped in front of the posts and Cronin picked up from the ruck to crash over by the posts, TMO Jude Quinn confirming the grounding.

Keatley converted and Francis was unable to respond before the break, drilling a penalty wide from a tricky spot on the left and missing on the right in the final seconds.

Referee Marius Mitrea sided with Edinburgh for a couple of scrum decisions early in the second half, helping them build some much-needed territory.

Scotland international De Luca left Coughlan for dead and evaded the grasp of two more defenders on a fine 25-metre burst to the try-line, with Francis converting from in front of the posts.

But Munster made certain of their bonus point with 53 minutes gone, Cronin and Coughlan gaining the hard yards before Keatley's long pass put Dineen over in the left corner for an unconverted score.

Gaining more possession by the minute, Edinburgh closed the gap to 27-16 thanks to a Harry Leonard penalty as they set up a competitive final quarter.

Munster were no doubt frustrated by not putting the Scots away and they effectively made the game safe with Hanrahan's easy run-in from a clever feed from fellow replacement Cathal Sheridan, the former adding the conversion.

Nonetheless, Edinburgh coach Alan Solomons will have been pleased with the perseverance shown by his players, a strong run and step inside from Jones seeing him go over, with Leonard adding the conversion.