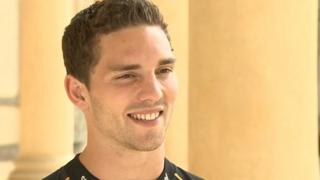 New Northampton Saints wing George North tells BBC Look East he has come to Franklin's Gardens to be competing to win the Premiership and Heineken Cup.

The 21-year-old, part of the victorious Lions squad in Australia over the summer, has won the Six Nations twice and now wants to add to his collection of silverware.

North joined the Saints from Scarlets in the summer on a three-year deal.