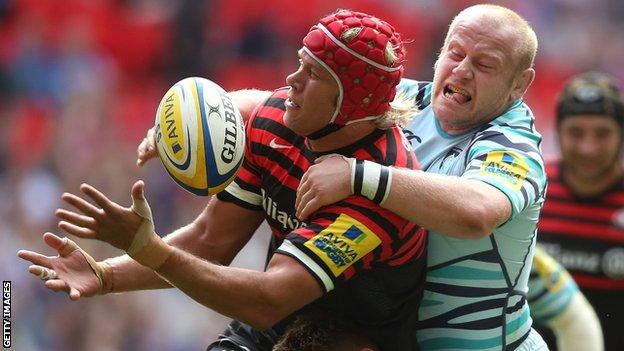 With the first round of the Premiership taking place over the weekend, resident rugby union expert Jeremy Guscott runs the rule over the new season.

Which players will make a big impact this season?

The biggest signing in the Aviva Premiership for this season has to be George North at Northampton. At just 21 he is a superstar - his tries during the Lions tour have elevated him into that 'galactico' arena.

We all want to see great players and there is no doubt this guy has that star quality, the X-factor. He needs big games and to score tries - that will make settling in and being accepted at Saints so much easier.

It will be interesting to see if Wasps wing Christian Wade can repeat his great form of last season, while one battle that really catches my eye is Gloucester's Freddie Burns against Saracens's Owen Farrell. Can Burns claim the England shirt from the incumbent Farrell?

Another big talking point is whether anyone can play better than Harlequins's Chris Robshaw at seven and get the captain's armband for England?

England need to score more tries so I would like to see Billy Twelvetrees really connect with his game, step in at 12 and guide England's backs so they cross the line more often.

There is a ton of talent in the Premiership, and a lot of it is young as well. I just hope those players take their opportunities this season and make it one to remember.

Which clubs will be in the mix for the title?

I don't see seismic changes in the top four, maybe some shuffling of positions.

Saracens still look strong and have strengthened their squad with a powerful double in prop James Johnston and number eight Billy Vunipola.

1. Saracens to finish top and win the Premiership final

If this outfit decide to go out and score tries - and combine that with their natural defensive solidity - they will be even more difficult to stop.

Leicester will always perform - their home record has to be one of the best ever. Expectation and fear of failing to live up to past glories really drive this club and the current group of players.

There is some doubt about whether fly-half Toby Flood will sign a new contract and confirmation is needed there sooner rather than later because uncertainty can fracture teams.

Harlequins' season will be all about coping with the players who have left - Johnston is a big loss, for example - and integrating the new arrivals. They will also have to keep their players fresh as I thought they ran out of gas by the end of last season.

How Paul Doran-Jones does instead of Johnston at prop could be crucial to Quins' hopes of staying in the top four, while second row Nick Kennedy is a great signing from Toulon.

Northampton should have the confidence to give it a real go this season. Stephen Myler is established at 10 and with Lions stars North and Alex Corbisiero they have some real class arriving to make up for those who have departed, notably props Soane Tonga'uiha and Brian Mujati, who have both joined Racing Metro.

If they can build on their semi-final victory away to Saracens last season they can be right there again at the end - hopefully with all 15 men on the field.

However, they will have to improve their results against the top three if they want a home semi-final this year.

Of the rest, Gloucester and Bath could challenge the four teams who have sewn up the play-off places in the past couple of years.

Who's facing a relegation battle?

Promoted Newcastle will obviously be one of the favourites to go down, the newbies generally are.

Not many sides come up and prosper like Exeter Chiefs but Dean Richards will be positive his preparation has been good enough.

Newcastle, London Irish, Sale and Worcester will be most neutral followers's tips to go down.

They will all be targeting 40 points to be safe and the games between these teams will be crucial for their survival - win those match-ups and you pretty much secure your survival.

Confidence for these teams is vital. Last season Worcester, Sale and Irish all had periods when they could not buy a point. If that happens again their heads will drop and they will once again face a real dogfight to stay up.

Wasps do not have masses of strength in depth and they could be sucked into this group if they suffer some unfortunate injuries.

What effect will the new directives have?

Quite honestly, the previous scrummaging laws just needed to be refereed correctly and the scrum would not have got into the mess it did.

However, we are where we are and the refs get another opportunity to do the right thing with the new directives.

It has been quite funny watching teams adapt to having to hook the ball in scrums in the Rugby Championship.

New Zealand have done it as well as we would expect, given that they are so smart at adapting and getting things right - but Argentina really struggled in their first game against South Africa.

I guess that was no surprise because they were first to adapt the "hit and keep pushing with no hooking" tactic.

Hopefully, the benefit will be teams attacking more from scrums rather than just expecting to win or lose a penalty - which will be a win for both spectators and the back line.