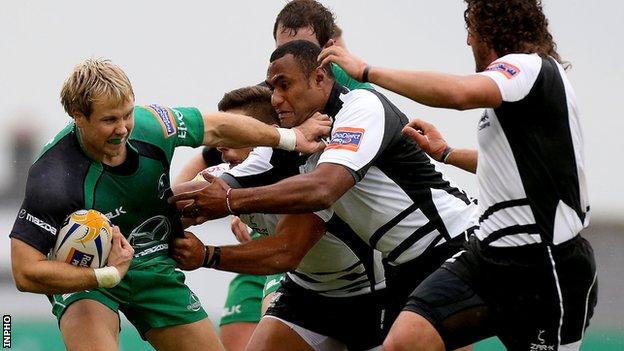 New coach Pat Lam's enjoyed a winning start in Galway as Connacht swept Zebre aside in their opening Pro12 fixture.

Prop Nathan White and winger Matt Healy scored tries in the first half as the Irish province took control.

Fionn Carr flew in for try number three in the 75th minute before Zebre got a deserved consolation score from Luca Redolfini in the final minute,

It was an fine start for former Samoa captain Lam in his first competitive game since succeeding Eric Elwood.

His side seized an early lead when White, alert to a quickly-taken Zebre line-out, intercepted the throw to canter in from 25 metres out.

Luciano Orquera closed the gap to 5-3 after Connacht were penalised for not rolling away.

The game lulled along until Parks spread play intelligently with a skip pass in the 29th minute, Carr came in off his wing and linked superbly with Healy who shimmied and then beat his man on the outside.

Parks landed the touchline conversion for nine-point advantage and then slotted over a penalty to make it 15-3 at half-time.

Zebre opened the scoring in the second half, winning a penalty which Orquera stuck over with six minutes gone.

The territory swung in improving Zebre's favour during the third quarter, the tension increasing for the home support as Orquera cut Connacht's lead to six points.

Parks snapped back three points as Lam looked to his bench, with young Kiwi Jake Heenan making his mark with a couple of useful turnovers.

Man-of-the-match Rob Henshaw and pacey replacements Tiernan O'Halloran and Paul O'Donohoe also lifted the province late on, the latter releasing Carr for his 75th minute try just to the right of the posts.

The conversion by Parks took Connacht 25-9 clear before reserve prop Redolfini rumbled over for a try his team's second half efforts merited.