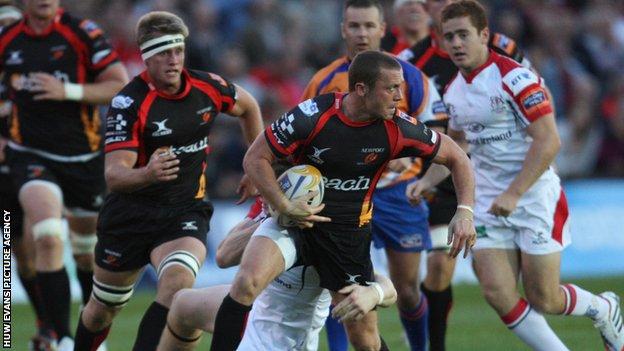 The Dragons, the lowest placed Welsh region last season, won 15-8 at Rodney Parade in their opening game of the new campaign.

Jones, appointed in June, said: "There's a lot better to come from us.

"But we don't want to get carried away because we need to keep our feet on the floor."

He added: "We will play a lot worse teams than Ulster this season. That took a lot out of us [but] this group is growing.

"These boys have been on their backsides last season and [the Ulster game] was a tap on the back for them.

"I'm sure we can finish higher than 11th this season."

All of the Dragons points were scored by 24-year-old fly-half Jason Tovey, making his return for the region following a season with Cardiff Blues.

"I've always been a big fan of Jason Tovey since I came here first," Jones said.

"I think he's a very good player and he proved that [against Ulster].

"He's got all the bits for a top quality player. I'm a big fan of his and make no secret of that."

Tovey was preferred to another new recruit, Italy fly-half Kris Burton, and Jones says competition for the number 10 jersey can only be a good thing for the Dragons this season.

"We made a decision to start with Jason and we didn't pull him off. The game was too intense and too tight to bring a different set of half-backs on.

"Kris will have his chance and he brings a lot of qualities to a game. His kicking game is quite outstanding.

"But that's where we need to be. We need to have strength in depth and we need to be brave enough to change selection around.

"We've got Edinburgh next week and Scarlets the week after, which is a huge game for us."