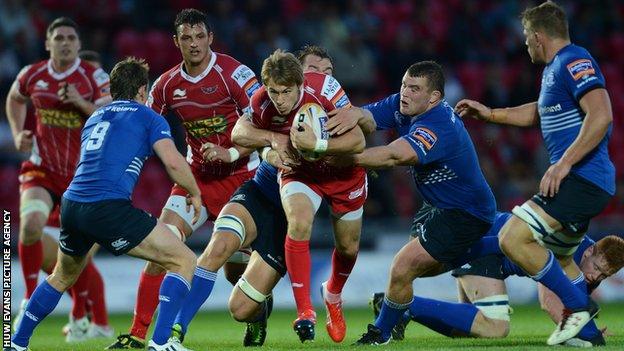 Scarlets coach Simon Easterby says his side will have a point to prove against Treviso following a "terrible" performance in defeat to Leinster in their opening game of the Pro12 season.

On Saturday they host the Italians, who humbled them 41-17 in Llanelli in May.

"We've got a point to prove after this game never mind last season," head coach Easterby said."We were terrible [against Leinster]."

He added: "We've got a lot of work to do starting now to make sure we don't embarrass ourselves like that.

"But we're not going to over-react just one game into a very long season.

"We also know what promise and ability we have in this side and when we've shaken off the disappointment, there was plenty in the game for us to build from.

"This is a time for strong and clear leadership from our senior players and the coaches."

Scarlets led Leinster 16-10 at half-time on Friday but it was all Leinster after the interval, the Irish side adding four tries to Martin Moore's first-half score to seal a comprehensive bonus-point win.

"The players were very good in the first 40 minutes," Easterby said.

"The scrum was strong, we had good possession and field position and we kept the scoreboard ticking over.

"The players did all we talked about and executed well. It was very encouraging.

"However, we conceded early in the second half and after that we started to chase and tried to force things which led to us coughing up a lot of ball.

"It was about our errors rather than being forced into mistakes and these are things we can fix."

Treviso will arrive having lost in their season opener on Saturday, the first time they have lost to a Welsh side at the Stadio Monigo in six encounters.