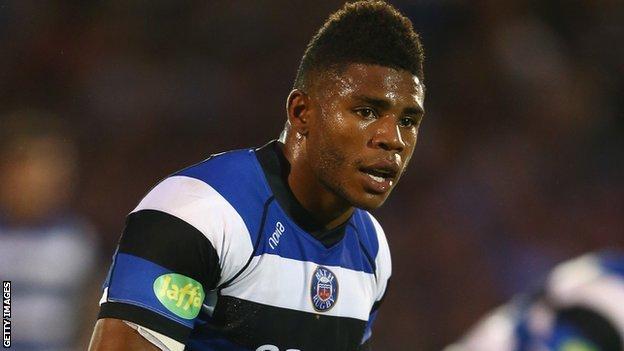 Bath coach Mike Ford says the club are not concerned by the knee injury that forced centre Kyle Eastmond off the field in Friday's win over Newcastle.

Eastmond had passed a late fitness test but limped off after 39 minutes and was replaced by new signing Gavin Henson.

"Whether he'll be fit for next week or not - it's too early to tell."

Bath ran out 21-0 winners in their opening game of the season at the Falcons and Wales international Henson received praise for his debut performance.

"It was good to bring on Gav. It shows our strength in depth," said Ford.

"It was good for him as he's taken a few knocks in pre-season. He's got his debut out of the way, and the hype that goes with that. He put in a hard graft and I thought he did well."

Ford was also impressed with how his team dealt with the treacherous conditions at Kingston Park, which was soaked by heavy rain throughout the game.

"We've trained all summer in the sun and the conditions tonight were dreadful," he added. "We were able to adapt to the conditions and show some toughness.

"We didn't give them an inch. To keep them to nil with only one shot on goal was great testament to our game management."