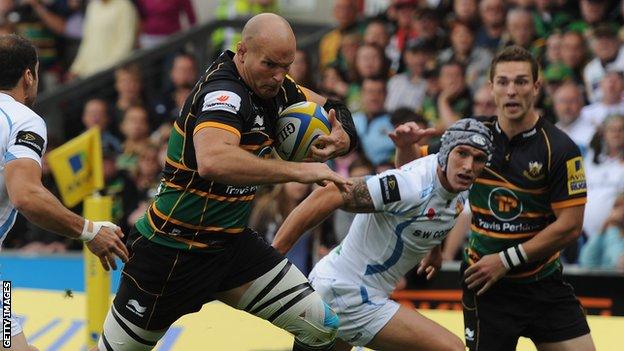 Northampton Saints' Sam Dickinson says his man-of-the-match showing against Exeter had been "a while coming."

The 28-year-old helped Saints to a bonus-point win on his debut, having been out injured with a broken arm since signing in 2012.

"The support I've had has been absolutely brilliant," the former Rotherham captain told BBC Radio Northampton.

"I have things to work on [to see] if I can come up another level."

We've got a lot of talented players. We need to keep them all hungry

Dickinson was injured whilst playing for the Titans in March 2012, six days after agreeing the move to Franklin's Gardens.

That was the second time he had broken his arm in the space of a few months.

"This has been a while coming for me," he said.

Saints captain Dylan Hartley praised his side's "outstanding" start and acknowledged the impact that Dickinson had had on the match.

"It was the perfect start," said Hartley, who scored their first try.

"There was a lot of talk about the headliners, Alex Corbisiero and George North. But Sam [has come] from the Championship and he has been here a year, been in rehab and he's come back and pulled out a performance like that.

"We can't rely on the big signings all year, it's a squad game, so really happy with that."

"We've talked for a long time about having a squad that is strong enough to go and challenge for top honours," he said.

"We've been developing that, particularly in the forwards, and we've got a lot of talented players. We need to keep them all hungry."