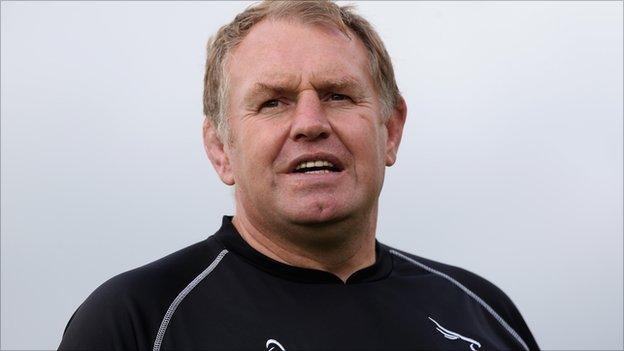 Newcastle Falcons director of rugby Dean Richards has played down the impact of on their Premiership survival hopes.

Their return to the top flight after promotion ended in a 21-0 loss in atrocious conditions at Kingston Park.

Richards' side lost just once in the Championship last term as they secured promotion to the top flight.

"It's a long season, it's not about today it's where we are at the end," the 50-year-old told BBC Newcastle.

The club made their return after a season away in front of TV cameras, which also documented largely the result of a three-year ban for his involvement in fake blood injury incidents with previous club Harlequins.

He transformed Quins from Premiership newcomers to title challengers inside three seasons.

However, they found out how tough the top tier can be with five defeats in their first five games when they climbed up in the 2006-07 season.

"I've been here before with Harlequins, you come up and it's very difficult," he added.

"Look at London Welsh, they made a great start to last season and still went down, so it's about what happens across the year."

Despite their failure to register a point against Gary Gold's Bath side, Richards was enthused by aspects of Newcastle's overall play.

"We need to be more clinical in the things that we do," he added.