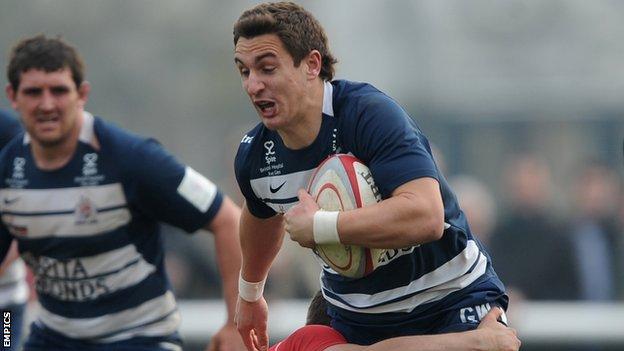 Bristol winger George Watkins has been ruled out for five weeks after fracturing a finger.

Watkins, who turns 23 this week, sustained the injury in the pre-season defeat by Exeter Chiefs last month.

Fly-half Tristan Roberts will also miss the start of the new Championship season after damaging a shoulder in a 76-0 victory over Clifton.

Bristol will begin their campaign on Sunday against Cornish Pirates at Exeter's Sandy Park ground.

Nicky Robinson (chest), Mark Lilley (sternum), Kyle Traynor and Jason Hobson (both hamstring) are all likely to be available for the opener after recovering from injuries incurred over the summer.

However, Jack Wallace, Jack Tovey and Errie Claassens are continuing their rehabilitation from long-term problems and are not expected back for a number of months.

Bristol will also be without hooker Ross Johnstone, who is banned until 19 October after receiving a red card for a tip tackle on Clifton lock Joe Quinn.