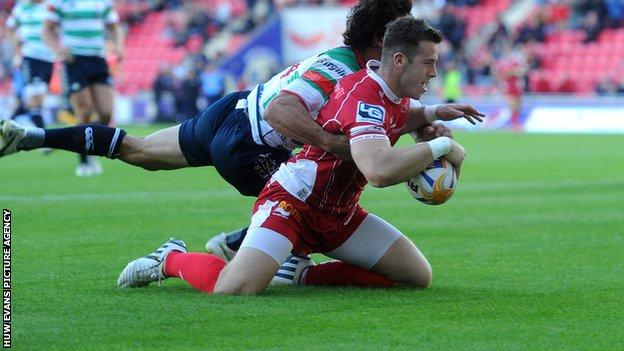 Scrum-half Gareth Davies crossed for two tries in the Scarlets first Pro12 victory of the new campaign against Italian side Treviso.

Davies' two first-half tries and 16 points from the boot of centre Steven Shingler proved enough to get the win for the home side at Parc Y Scarlets.

British and Irish Lions centre Jonathan Davies made his return for the Scarlets as a second-half replacement.

While the two tries by scrum-half Davies and the return of his Lions namesake on the 61st minute will be the main talking points of this game, it was the impressive boot of centre Shingler and the Scarlets scrum which proved key to this victory.

Shingler did not miss a kick all evening, landing two conversions and four penalties, while the Scarlets scrum proved a real weapon against the usually formidable scrum of Treviso.

Scarlets coach Simon Easterby had labelled his side "terrible" after the 42-19 home defeat to Leinster and he certainly got the response he would have wanted after those remarks against the Italians.

The Scarlets made the perfect start when scrum-half Davies, running in from halfway and leaving defenders trailing in his wake, scored a superb solo effort to give the home side a lead they never looked like losing.

Centre Shingler then added the first of his two conversions to make it 7-0 to the Scarlets.

Davies then crossed for his second try ten minutes later when the home pack shoved the Italians of their own ball at a five-metre scrum, leaving blindside flanker Aaron Shingler to scoop up the loose ball and put Davies in for the score.

But Scrum-half Davies then found himself on the wrong side of Irish referee David Wilkinson when he squared up to Treviso fly-half Alberto Di Bernardo and both players were shown the yellow card.

With both sides down to 14-men, Treviso scored their first points with a penalty by impressive scrum-half Tobias Botes on the stroke of half-time to make it 14-3 to the Scarlets at the break.

Shingler slotted over a penalty at the start of the second-half to give the Scarlets a 14-point margin before Treviso replied with a try.

A chip and chase by Botes caught the Scarlets defence flat-footed and wing Ludovico Nitoglia was on hand to gather the loose ball and to score the try to keep the Italians in the contest.

But Shingler's reliable boot, with three late penalties, was enough to secure a first victory of the Pro12 season for the Scarlets.