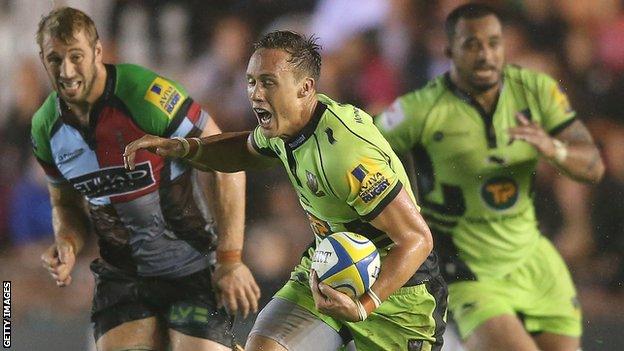 A tight first half saw Northampton's Stephen Myler and Harlequins' Nick Evans exchange penalties for a 3-3 scoreline at the interval.

Evans nudged the hosts ahead, but Myler replied seven minutes later as the two teams cancelled each other out.

Wilson went over in the second half, a try converted by Myler, to ensure the visitors a second straight victory.

Driving rain made conditions worse as the half went on, Myler missing his second penalty attempt with 15 minutes of the first period remaining.

Evans drew Harlequins level 10 minutes before the break to ensure parity at half-time and, after missing an attempt just after the interval, he nudged hosts ahead from his fifth attempt of the night.

Myler made it 6-6 before Evans missed a difficult long-range kick and it proved decisive.

The strength of Wales wing George North set up Wilson for the game's only try, with the extras added by Myler.

Quins had number eight Nick Easter sin-binned for a professional foul late on and Myler followed for a deliberate knock-on, but Saints had done enough for a second successive victory.

"It's really disappointing because I thought we played some really good rugby in horrific conditions but didn't get the reward.

"I said to the boys even before the game, this doesn't define your season.

"If we play like that week in, week out we'll be fine. We just have to take our chances and we had enough."

"To come away to somewhere like this and win is an outstanding result.

"It was a horrible Friday night, Harlequins are quite rightly serious contenders for the Premiership. To come here and beat them is significant.

"I'm very pleased. It was always going to be tight and it was a question of getting your set-piece right.

"Stephen Myler kicked well and then we got our try-scoring opportunity and took it."