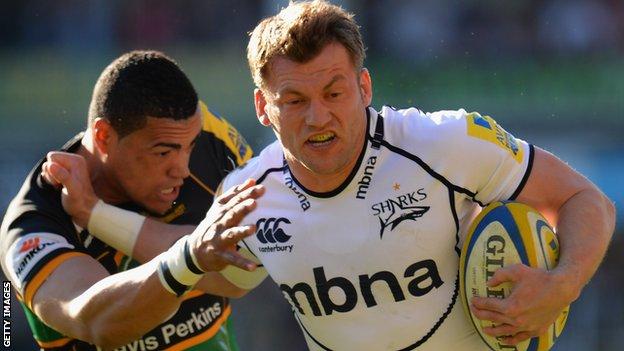 Phil Godman kicked four penalties from four as Newcastle won at Sale in their second game back in the Premiership.

The home side led 11-3 at the 30-minute mark after Dan Braid went over, before the Falcons hit back just before the break with two Godman penalties.

Sale's two-point half-time lead was wiped out by Godman's fourth successful penalty, but Nick MacLeod responded to put the hosts ahead again.

On a day when the Salford City Stadium was renamed 'The AJ Bell Stadium' as part of a new sponsorship deal, the home side slipped to their first defeat of the season.

The hosts had an early chance to put points on the board but MacLeod's penalty hit the post, although he was more accurate soon after as he landed his second attempt.

Despite being second best for much of the opening exchanges, Newcastle were level midway through the first half.

MacLeod's penalty edged Sale ahead again, before the visitors' Dom Barrow was shown a yellow card for bringing down the maul.

The extra man paid immediate dividends as a well-worked play from the line-out saw Braid power over in the right-hand corner, although MacLeod missed the conversion.

Godman's fourth accurate kick from four put Newcastle ahead for the first time, while, at the other end, MacLeod missed the chance to put Sale back in front.

He was successful, however, from his sixth kick of the night as Sale regained their two-point lead.

Falcons were dominating at the scrum and Clegg's penalty proved the difference in the second half, as Newcastle hung on to record victory in their first away game of the season.

"I thought first half we had a lot of ball and tried to do stuff with it, we got a try in the corner, and we just couldn't get away from Newcastle.

"Second half I thought they were a far better, streetwise team than ourselves, didn't allow us to play and a couple of decisions went against us.

"I'm thoroughly disappointed. That's how it goes, but on their second-half performance I think they deserved their win."

"We probably edged it in the second half and deserved to win.

"It was a tight affair and if we'd sorted out our defence of the rolling mauls in the first half it might have been a little bit further.

"I thought we were under the cosh a little bit because we were quite happy to give them possession but I thought we defended extremely well, put our bodies on the line and that was probably the thing that got us the result."