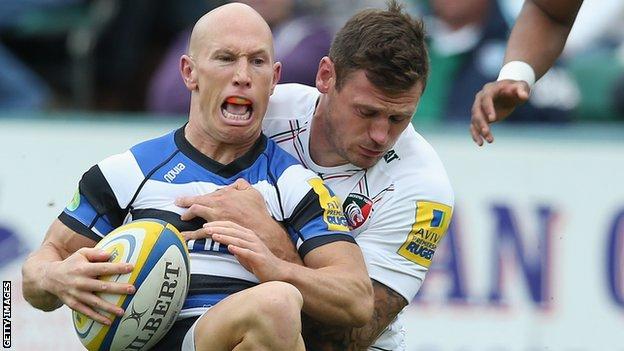 Bath survived a Leicester fightback to secure a famous win over the Premiership champions, 100 years after their first ever meeting.

Bath took the initiative with Jonathan Joseph intercepting a Ryan Lamb pass and racing away to score.

With two Tigers in the sin bin, Matt Banahan scored to give Bath a 21-3 half-time lead.

Ford in the points

George Ford moved on to 191 career Premiership points with 17 against his former club. Ford scored 163 points for Leicester before leaving Welford Road in the summer

Leicester were 19-5 victors when the clubs faced each other for the first time in September 1913 and have won another 30 of the subsequent 52 meetings.

And despite plenty of possession they failed to make it 31 against clinical Bath, with a failure to stay on the good side of referee Greg Garner a particular problem for Richard Cockerill's team in the first period.

Tigers took an early lead through the boot of David Mele, but Ford hit back with one of his own to land the first of 17 points against the team he left in the summer.

Bath's opening try was of Leicester's own making, Lamb's looping pass out wide deep in the hosts' half cut out by Joseph, who sprinted to touch down under the posts, giving Ford a simple conversion.

Ill-discipline began to set in for the visitors, with Mele pulled up twice for failing to put he ball into the scrum straight, and Logovi'i Mulipola seeing yellow for a high tackle on Dave Attwood.

Tom Youngs followed his team-mate into the sin bin for bringing down a Bath maul and, following another Ford penalty, Gary Gold's side took full advantage before half-time when Gavin Henson, on his first start, fed Banahan, who showed strength and persistence to cross, although Ford missed the extras.

Leicester, showing the grit that earned them last season's title, responded immediately after the break with a superb try, Adam Thompstone collecting a Lamb crossfield kick and handing off to Mafi, who finished before Mele kicked wide.

Mafi then turned provider, passing to Slater, who just about managed to touch down in the corner without putting a foot out and Mele hit a brilliant conversion from right on the sideline.

Tigers pulled within four points when Goneva finished after good work from Youngs and Thompstone.

But the prospect of a stunning Leicester comeback was extinguished by Ford's late penalty, making it two wins out of two for Bath this season, although the visitors collected a losing a bonus point.

"I just wanted to come and play, and thankfully I've had four or five games in a row now, including pre-season.

"I will try to keep my head down, keep working hard in training and see where it takes us.

"It was a tough game. We lost a bit of intensity in the second half and Leicester came back at us.

"We knew Leicester would come back, and we probably didn't grasp hold of the game well enough at the start of the second half.

"One of their biggest strengths is how fit they are, and they were still hammering away in the 78th and 79th minutes."

"We gave ourselves a mountain to climb at 21-3 down, but we addressed a few things and I am really proud of the second-half performance.

"We created a lot of opportunities, got to the outside channels and exposed Bath.

"We came here to play and to score tries, and we scored three against their two.

"When it got to 24-20, we had the momentum in the game. Bath were kicking away a lot of ball, and I thought we rattled them."