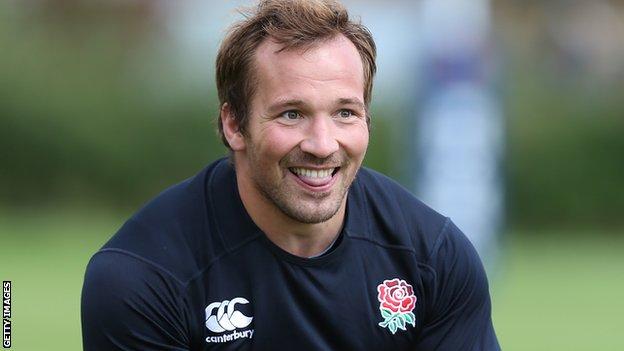 The 28-year-old England international joined Quins this summer after two years with the Saints.

He told BBC London 94.9: "If it could have been drawn up, this is probably how I would have wanted it.

"It will be tough for both sides but it will be a great experience for me, with a packed house at the Stoop hopefully. It will be fiercely competitive."

Enfield-born Doran-Jones, who has won six caps for England, says the opportunity to return south was a factor in his decision to move to the Twickenham Stoop.

"Both clubs are great clubs," he said.

It was a tough decision to leave Saints but hopefully it will be a long, illustrious career here

"Northampton is a fantastic club with a massive fanbase, huge stadium and a tradition.

"It was just a chance to come back home, live where I grew up, settle here and hopefully put some roots down.

"I don't really want to be moving too much more. It was a great opportunity at a club which is doing really, really well.

"It was a tough decision to leave Saints but hopefully it will be a long, illustrious career here.

"I am really enjoying it and it is a fantastic club. The way they try play the game is one that hopefully suits me."

Harlequins, the 2012 Aviva Premiership champions, started the new campaign with a 16-15 victory over London Wasps at Twickenham last Saturday.

Doran-Jones says they must make improvements for the visit of Northampton.

"It was a fiercely competed game and Wasps were on their mettle," he said.

"We probably didn't get our game on to the pitch and left feeling a little bit frustrated. It was good to get a win but there are a lot of things to put right which we have talked about.

"Saints are a top European side - not just in the Premiership.

"If we can get our processes and the fundamentals in place [which] we perhaps lacked on Saturday we will hopefully get the result.

"Both teams will be looking for a top-four finish and then greater honours but that is a long way off."