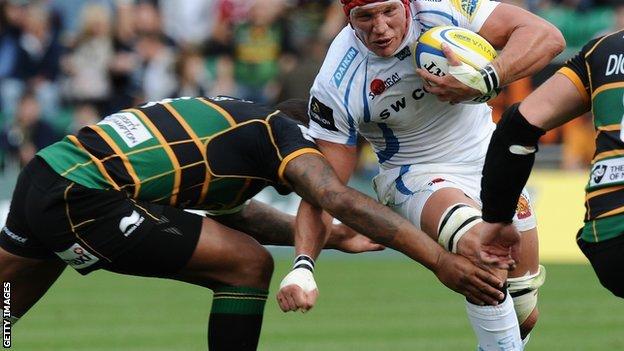 Northampton Saints forward Courtney Lawes has said he will improve his tackling this season, but not by "hitting harder".

The 24-year-old England lock, renowned for his big tackles, has refined his approach to defensive work.

"I don't know if I can hit harder and keep my shoulders intact," he told BBC Radio Northampton.

"I know I can make my hits technically rather than throwing my body in and hoping for the best."

Lawes's approach was best summed up by the two crunching challenges he landed on Leicester's Toby Flood in last season's Premiership final, with the fly-half having to eventually hobble out of the match.

It is a style that has earned him 22 England caps and a regular place among Stuart Lancaster's squad, and he expects to continue progressing in the new campaign.

"I'm certainly getting back to good form again," he said. "You don't have to go out and try ridiculously hard to play well. Mentally I'm in the right place."

Saints recruited strongly in the summer after losing May's final to the Tigers and the three high profile signings of George North, Alex Corbisiero and Kahn Fotuali'i featured in

"Anyone can see the signings this year and we've had some real big ones," said Lawes.

"Especially compared to last season when we didn't bring many big signings in.