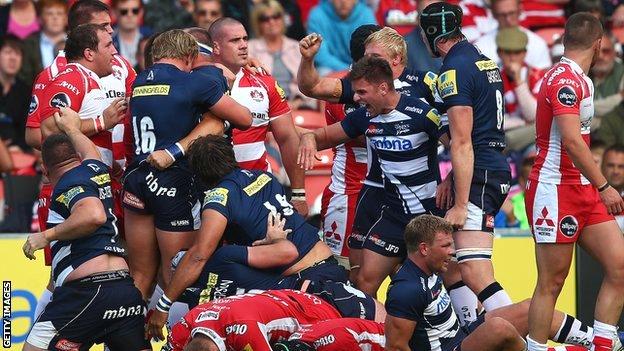 Mark Cueto hopes Sale's opening-day victory at Gloucester will help to end any thoughts the Sharks will be involved in another relegation battle.

Sale lost their first seven games last term and only escaped the drop in the final few weeks of the campaign.

But they began the 2013-14 season with an impressive

"This time last year we would have probably lost. To get a result down there in the first game is massive," he told BBC Radio Manchester.

"If we're being realistic, you can understand to a degree why people were expecting us to be down there [this year]."

"With the signings we've made, on and off the field, maybe those predictions weren't quite right. Hopefully the start we've got off to is how we're set to go on," added the 33-year-old winger, capped 55 times by his country,

Sale, who recovered from their terrible start to finish 10th in 2012-13, play their first home fixture against promoted Newcastle Falcons on Friday and director of rugby Steve Diamond is determined not to let his squad get too carried away after their dream start.

"One swallow doesn't make a summer," he said. "It all goes to nothing if we don't win against Newcastle."