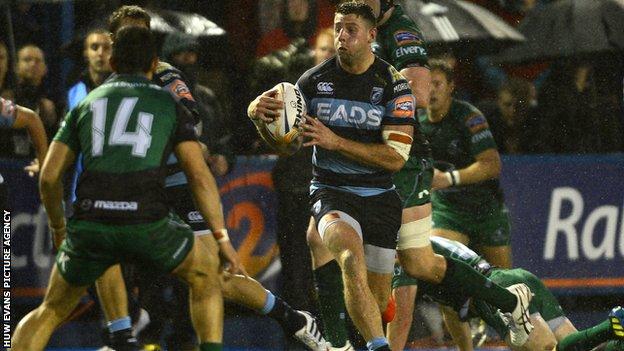 Fly-half Rhys Patchell scored all of Cardiff Blues' points in this hard-fought victory over Irish province Connacht at the Arms Park.

He landed six penalties and a drop goal in a man-of-the-match performance to give the Blues their first win of the new season.

Wing Matt Healy scored the only try of the game to give Connacht a 10-9 lead at half-time.

Patchell scored 12 unanswered points in the second half to secure the victory.

The Blues welcomed back British and Irish Lions wing Alex Cuthbert for his first competitive game of the season but, despite the new artificial pitch at the Arms Park, he had little chance to shine.

The wet conditions meant ball retention was poor and there were many dropped passes and loose kicks.

A minute's silence was held before kick-off for Wales and Lions legend Cliff Morgan, who played for the old Cardiff club, and whose funeral had been held earlier in the day on the Isle of Wight.

Former Blues fly-half Dan Parks, who is now player-coach at Connacht, had a kicking duel with Patchell, who missed his first two penalties.

The visitors scored the first points of the game when scrum-half Kieran Marmion's half-break paved the way for wing Healey's clear run for a 12th-minute try.

Parks added the conversion, but Patchell replied with two penalties of his own to claw the home side back into the contest.

The Blues fly-half then added a drop-goal to give the home side a lead for the first time before Parks restored Connacht's lead with his second penalty, making it 10-9 to the visitors as the opening period ended.

After the break, Patchell reclaimed the lead for the Blues with his third penalty before Cuthbert's half-break ended with full-back Tom Williams tackled into touch just short of the line.

The Blues were the dominant side in the second half, but they lacked the composure to finish off the chances they created.

Parks and Patchell both missed penalties midway through the second half.

The home side could have scored when the Blues pack made some impressive yardage, but Tongan prop Taufa'ao Filise lost control near the line and Connacht cleared their lines.

But Patchell ended his own impressive display with three late penalties to secure the win for the home side.