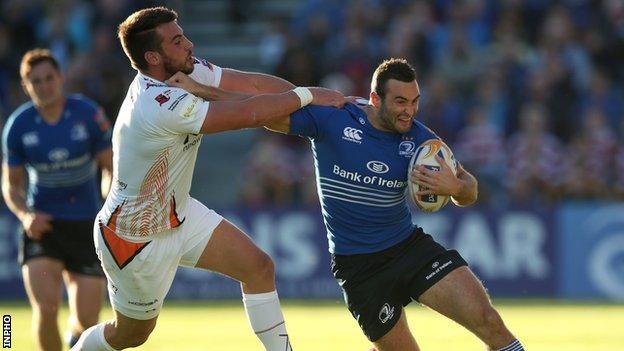 Defending champions Leinster and the Ospreys took two points apiece after an entertaining Pro12 draw at the RDS.

In a see-saw match Richardt Strauss, Dave Kearney and Jack McGrath scored tries for Leinster, with Jimmy Gopperth kicking 14 points for the home side.

Joe Bearman and Ashley Beck crossed the line for the Welsh outfit while Dan Biggar added 19 points with the boot.

Biggar landed a penalty two minutes into injury-time to secure a share of the points for the visitors.

The result sees Leinster remain third in the table after two games, with Ospreys moving up to fourth.

Fly-half Biggar snatched a draw for the Ospreys in Dublin as Leinster let their 10-point first-half advantage slip away.

Referee Leighton Hodges awarded a controversial injury-time penalty and moved the kick even closer as he punished Leinster for not retreating quickly enough.

Biggar appeared nerveless from the kicking tee as he slotted the ball between the posts.

Leinster dictated for most of the first half with Strauss and Kearney running in tries.

They should have been further ahead than 16-9 at the break, Biggar keeping the Welsh region in touch with three penalties, including one just before the interval to cut the deficit to single figures.

Biggar and Jimmy Gopperth swapped kicks on the resumption before the Ospreys raced ahead thanks to two tries in the space of three minutes from Bearman and Beck.

It looked like curtains for the Irish province when they had Sean Cronin sin-binned, but they managed to score 10 points while the hooker was off - Gopperth converting man-of-the-match Jack McGrath's try and adding another penalty for the lead.

Yet there was yet another twist in the edge-of-the-seat contest, a last-gasp ruck offence paving the way for Biggar's equalising kick.

The Ospreys had been first off the mark in the Dublin sunshine, retaining possession well before a ruck infringement from Devin Toner allowed Biggar to open the scoring three minutes in.

Leinster cancelled that out with a fine try just two minutes later. Brendan Macken sparked the initial break on the right, with Gopperth and Darragh Fanning getting involved, and some fine continuity sucked in the visitors' defence for McGrath to send fellow front-rower Strauss over unopposed in the left corner.

Gopperth's conversion attempt missed on the near side and Leinster - minus late withdrawal Luke Fitzgerald who was ruled out with a tight groin - had to make further alterations to their back-line as Darren Hudson hobbled off and Ian Madigan was introduced at full-back.

Kearney, who switched to the wing, profited from a clever counter-attack for Leinster's second try in the 13th minute.

The province swung turnover ball wide for Gopperth to dart through a gap and he fed Kearney who left the covering Richard Fussell in his wake with a classy finish on the left.

Gopperth failed to add the extras, but his variation in open play was keeping the Ospreys guessing as Leinster continued to prosper with ball in hand.

In the second quarter, great hands from Toner to Strauss unlocked the Welsh defence and possession was retained for Gopperth to turn a low pass into a neatly-taken drop goal.

Biggar cancelled those three points out with his second successful penalty, before the hosts' hard graft at ruck time - Mike McCarthy on his home debut was in the thick of it - led to a penalty reply from Gopperth.

The Ospreys stayed within a converted score for half-time thanks to a late Biggar penalty after Jordi Murphy went off his feet at a ruck.

Adam Jones and Duncan Jones were sent on for the second half to solidify an Ospreys scrum that had come under pressure in the opening 40 minutes, with the former's introduction seeing him join fellow British & Irish Lion Ian Evans on the pitch.

McCarthy was caught tackling Scott Baldwin without the ball and the resulting penalty was fired through the posts by Biggar for a 16-12 scoreline.

Although Gopperth was able to restore Leinster's seven-point advantage soon after, the momentum of the game quickly shifted approaching the hour mark.

The Ospreys, boosted by their strong bench, did damage through their forwards to create two quick-fire try-scoring opportunities which they clinically took.

A brilliant burst up the left saw Evans release the equally influential Eli Walker and he managed to get his pass away for Beck to dive over in the corner.

Where Gopperth failed from a similar position earlier, Biggar was bang on target as his conversion moved the Ospreys 26-19 clear.

The Leinster pack were just held up short as they tried to maul their way over for a try in response. They kept up the territory but Cronin's yellow card - awarded for a harsh scrum call - rocked them at a crucial stage.

Captain Shane Jennings, who assumed the hooker's role at the subsequent lineouts, helped Leinster regroup and a muscular close-in drive from prop McGrath saw him score underneath the posts. Gopperth converted to make it 26-26.

Biggar miscued a drop-goal effort and young forwards Murphy and McGrath were both prominent as Leinster hunted for the winning score.

It look to have arrived when Sam Lewis was caught offside and Gopperth split the posts with just four minutes left.

However, the Ospreys showed impressive resilience to batter their way downfield and, thanks to Biggar, maintain their unbeaten start to the new season.