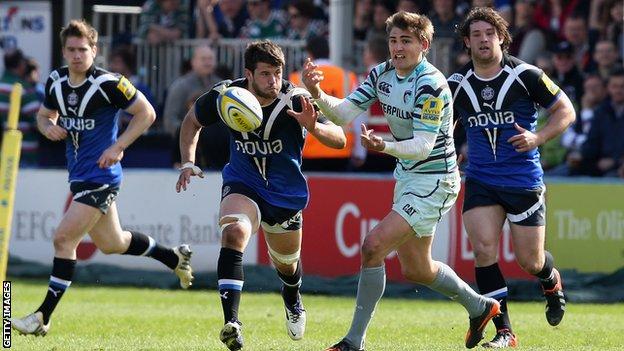 Jeremy Guscott fought many battles with Leicester during his years in the centres for Bath, so he knows just how strong the rivalry is between the two clubs.

This weekend's match is the centenary of the first meeting between the two sides, and with Leicester arriving as champions there is no doubt which club is in the ascendancy at the moment.

During Guscott's time at The Rec it was the West country club that ruled the roost - and he believes they are potentially on the cusp of a revival.

Bath v Leicester - why is it so big?

This game is big in a lot of different ways for different generations of families and supporters, and the players that have represented both clubs through the years.

Bath took over from Tigers as the dominant English club around 1983-84 and maintained that until the early-to-mid 1990s.

Since that time Tigers have been there or thereabouts, often battling for supremacy with Wasps and have been the most consistent English club for 25 years or so.

This particular fixtures is given an extra edge because of the anniversary. It evokes memories of all the great games of the past but, looking to the future, Bath are potential challengers to a Tigers team that will want to put down a marker.

What are your memories of the fixture?

Throughout my career, games against Leicester - as well as local rivals Gloucester and Bristol - were the biggest games that Bath played in, perhaps because of three cup finals Bath won in 1989, 1994 and 1996.

At the time, both teams were used to winning and were full of current or previous internationals players. Who wouldn't want to be involved in those games?

The contests were always full of tension, particularly the 1996 final when we got a penalty try to win 16-15. At the end of the game Leicester's Neil back mistook team-mate Steve Lander for Bath's Andy Robinson and pushed him over.

What do you make of the Bath new boys?

With a comfortable win at Newcastle on the opening weekend, Bath have got off to a good start. However, the visit of Leicester is one of the biggest tests of the season and it is good that it arrives early.

The Tigers challenge will show this relatively new Bath team where they are and how much further they need to go.

Fly-half George Ford ran the game well against the Falcons last week in poor conditions, he was tactically good and nailed most of his kicks.

The Tigers know him well and I'm sure the likes of Julian Salvi and Jordan Crane would like the opportunity to get some tackling practice in on their former team-mate.

We await to see what they can collectively produce, especially as there are high expectations to deal with.

Leicester head south as champions yet again - why are they so good?

You have to admire the Tigers - the club, supporters, playing squad and management.

Over the years they have been brilliant at maintaining their values by recruiting the right players. By that, I mean they have signed players that aren't always the best in their position but are seen as the right fit for the Tigers culture. That's very important.

The Tigers expects nothing less than 100% commitment on and off the field and expect their players to abide by the culture and code of conduct set out.

You may think that's the case at every club. It's not - and that is one of the reasons that the others have struggled to match Leicester.

Leicester ran over Worcester last week and they will look to power through Bath with more aggression and precision at the breakdown. They will look to make Bath players ask themselves whether they have what it takes to be a top-four team. Have they got the heart and soul for the fight?

Fly-half Ryan Lamb had a mixed game last weekend but that's what you get from a player who tends to play what he sees rather than what might have been planned. He does the unexpected, which is different to Toby Flood.

Flanker Tom Croft, who is out for the season with a knee injury, is a huge loss and we all wish him a speedy recovery.

Is this the season Bath come right?

Bath want to change from last season's defensive displays and test themselves with a more balanced style. This new game plan will be given a severe test against the Tigers.

Outside the clear colossal forward engagement that will take place, Bath's most important player will be Ford. If he has the clear mind to make the right decisions and produce a big-game performance, Bath will win.

Bath have been starved of success for some time now, but they have begun a journey under new owner Bruce Craig, who has arrived with ideas that are ambitious, but certainly not impossible.

Before Craig arrived, Bath had, in my opinion, lost their on-field identity, with no recognisable style. Only under Steve Meehan did they give the impression that something was building, but that ended and another unsuccessful period started.

For quite some time Bath haven't had enough quality players or guys who have wanted to work hard enough to earn success. Gary Gold, Mike Ford and their team of coaches have to create that environment.

Off the pitch you can see the changes, the club's administration and training facilities all under the same roof at Farleigh Manor, providing a great working habitat.

It's hoped the Recreation Ground could house a new stadium for 2015. Maybe Bath will have a winning team by then.