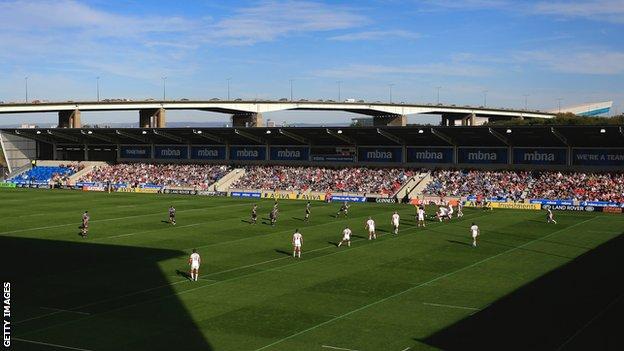 The Salford City Stadium, home of Salford Red Devils and Sale Sharks, is to be renamed 'The AJ Bell Stadium' as part of a new sponsorship deal.

The Sharks purchased naming rights to the stadium

"It's a good term for the club and for the region."

He added: "It's an injection of investment into the club and a business to add to our great portfolio of partners, and I'm sure AJ Bell [a Manchester-based investment firm] will benefit from the location of the stadium right next to the M60."

Since moving into the Salford City Stadium in 2012, Salford have won nine of their 25 home league fixtures, while Sale Sharks have won six of their 11 home league games.

Super League side Salford have been based at the ground since it was opened at the start of the 2012 Super League season, while Sale, who play in rugby union's Premiership, began staging their home games there in September of that year.

Soon after completing his takeover in January, Red Devils owner Dr Marwan Koukash stated that he which is co-owned by Salford City Council and property investment firm Peel Holdings.

And he recently revealed plans to develop the area around the venue to incorporate a water park, hotel, casino and sports bars.

The stadium, which has a capacity of around 12,000, cost an estimated £26m to construct and has already staged international matches in both football and rugby league.

at Salford in June last year, while was also played at the ground later that year.

Steve McNamara's side will also play their on 19 October.