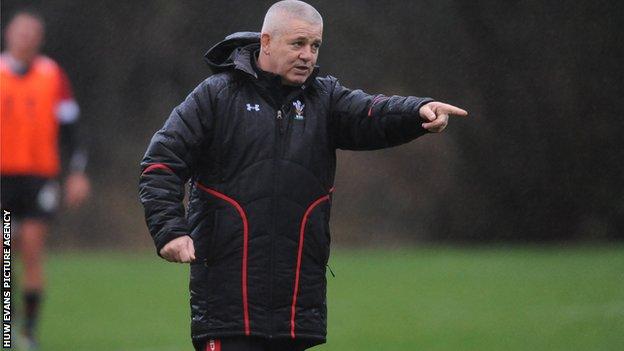 The New Zealander was appointed in 2008 and his contract with the Welsh Rugby Union ends after the 2015 tournament.

WRU chief executive Roger Lewis says he is ready to open contract talks with Gatland about staying in Wales.

It will be over a beer. I'll ask him: 'How do you feel? What do you think about the future?' And that will take as long as it takes

"If he wins the World Cup, he can ask for what he wants," said BBC Wales Scrum V's Davies.

"If, after 2015, he is still on that high and the All Blacks come knocking, it would be very difficult for him to resist.

"But 2015 is a long way away [and] we all know the group we are in with Australia and England."

Gatland is the longest-serving Wales coach and has enjoyed success, having won two Six Nations Championship Grand Slams in 2008 and 2012, another Championship title in 2013 as well as reaching the semi-final at the 2011 World Cup.

He guided the British and Irish Lions to their first Test series win in 16 years when they beat Australia 2-1 this year.

He has been linked with the New Zealand head coach job and has also been backed by 2013 Lions manager Andy Irvine to coach the Lions again when they tour New Zealand in 2017.

Lewis has said he wanted to start planning for the future of the Wales national team.

The WRU chief says there is no timeframe on a decision, but stresses that the WRU is looking to plan on a long-term basis.

"At this level of the game, it's not one year, two years or three years [of planning]," said Lewis.

"It's got to be what's right for Warren and his life, and his family. The other bits, in terms of the career, slot in."

"[The discussions with Gatland] will be over a beer. I'll ask him: 'How do you feel? What do you think about the future?' And that will take as long as it takes."