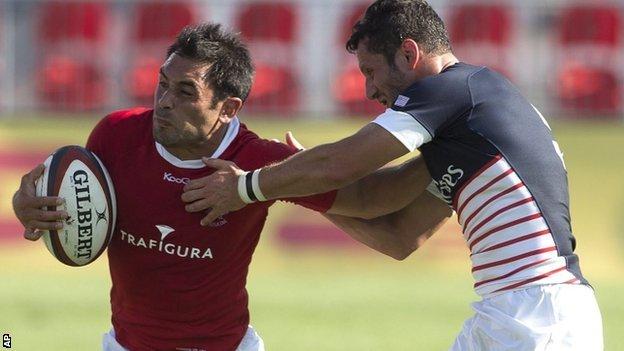 Mack, 27, has joined from Canadian side British Columbia Bears.

"We are pleased to have been able to secure Phil's services and he will provide us with some much-needed cover," said Ospreys rugby operations manager Andy Lloyd.

"With Rhys already sidelined, Tom's untimely pre-season injury has left us light at scrum-half, having only a winger or untried youngsters as cover.

"With that in mind, we felt it was crucial that we acted swiftly. In Phil we have someone who has impressed at international level and who we believe can come in at short notice and do a good job."

Mack, from Victoria, British Columbia, has played 19 times for Canada in total, 14 of them capped. He has been playing for the Bears in the Canadian Rugby Championship - the country's top flight.

His first cap came in May 2009 against Ireland and he was also involved a week later when Wales won 32-23 in Toronto.

His arrival gives Ospreys a fit scrum-half in addition to Italy cap Tebaldi, who agreed a two-year deal when he signed from Zebre in the summer.