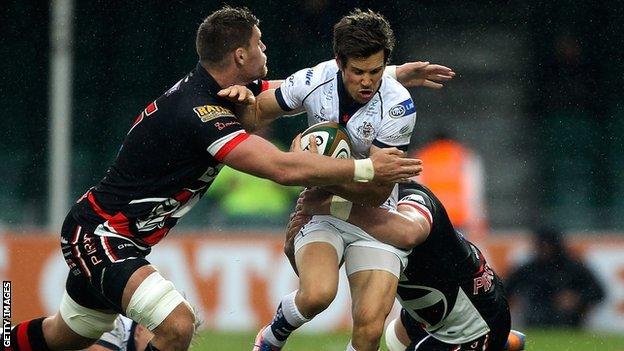 The former top-flight club started their Championship campaign with a 23-21 loss at Exeter's Sandy Park.

It was the first time Holley had watched Bristol in a competitive match since his appointment in April.

And the former Ospreys coach told BBC Radio Bristol: "I hadn't been involved in a Championship game and I didn't know what to expect. I do now."

He added: "I thought it was a very disappointing spectacle. They weren't good enough - simple as that."

After leading only once in the game - at 3-0 - Bristol had the chance to snatch a late draw after Luke Eves' try, but Adrian Jarvis missed his conversion in what was to be the last kick of the game.

"We can't say we were unlucky, had poor decisions or something affected us, we were just victims of our own downfall," Holley admitted.

"We need to change the mindset and start going for teams and be relentless. We need to have the ball in play for longer and be fitter than the opposition.

"None of that came through, so we've got plenty to work on."

Holley, who works as first-team coach under director of rugby Andy Robinson, has international experience as Wales assistant boss and has also spent time at Scarlets and Gloucester.

But his most successful spell came at Ospreys, where he spent nine years and led them to three Magners League titles.

After his first Championship game with Bristol, Holley said: "I feel a sense of relief as I understand what the Championship is about now. That's a positive on a personal level.

"Going in the changing room and seeing how disappointed the players were, maybe a bit embarrassed as well, shows me they care and that's something."