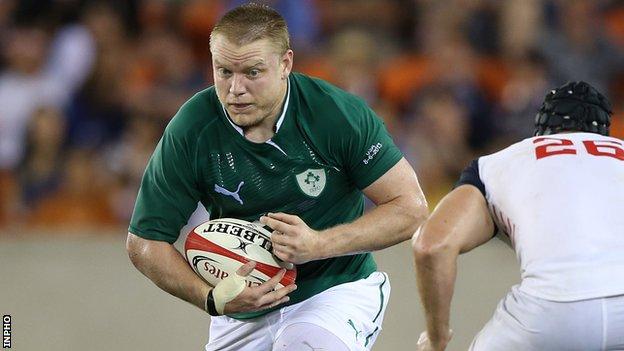 Court is missing from the 42-man squad, with Cian Healy, Dave Kilcoyne and Jack McGrath the selected loose-head props.

There is also a place for uncapped Leicester back Niall Morris.

Court, 32, fell out of favour during former national coach Declan Kidney's final year in charge, though he did start the Six Nations game against Scotland in February because of Healy's suspension.

Born in Australia, he was called into the British & Irish Lions squad during the summer as a replacement while on holiday in Brisbane.

But with Schmidt opting to call up uncapped 23-year-old Leinster prop McGrath, Court is left out of the training squad for the get-together at Carton House, in County Kildare, on Sunday and Monday.

Three other Ulster players - Andrew Trimble, Craig Gilroy and Stuart Olding - are among a group of players not considered because of injury, along with Munster pair Tommy O'Donnell and Felix Jones plus Leinster prop Michael Bent.

Utility back Morris, 25, is included after impressing for Leicester since his move from Leinster in 2011.

Leinster's Brian O'Driscoll, 34, in his final year before retirement, is named among the backs along with long-time club and international centre partner Gordon D'Arcy.

Veteran Munster lock Donncha O'Callaghan is also included along with Leinster flankers Shane Jennings and Kevin McLaughlin but James Downey, Kieran Marmion and Jamie Hagan, who were part of Ireland's squad for the North American tour in the summer, miss out.

Schmidt, appointed as Kidney's successor in April, said a number of the selections had been "very tight".

"The group is predominantly 'tried and proven' but with some newer faces as well," said the Ireland coach.

The get-together will be the beginning of preparations for the games against Samoa, Australia and New Zealand in November.