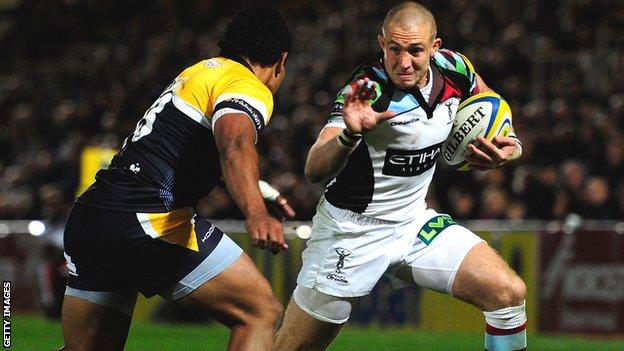 Worcester suffered their third straight defeat of the new campaign as they were overwhelmed by Harlequins.

Quins had seven England internationals on duty, and two of them - Danny Care and Joe Marler - ran in first-half tries, before Rob Buchanan and Mike Brown crossed after the break.

All four tries came with the Warriors down to 14 men from three yellow cards.

Worcester's only response was two early penalties and a late penalty try, all kicked by stand-off Ignacio Mieres.

The win puts the visitors on 10 points and lifted them to second in the table.

Nick Evans, Quins' villain a week ago when he missed four of his six kicks in the contributed two penalties and four conversions - for an individual 14-point haul.

The first half hour at Sixways consisted of the standard penalty exchange, with an early opener from Mieres first matched, then bettered by Evans, before Mieres levelled things up again.

I love watching them play rugby when they play like that

But Worcester paid for their indiscipline when their first sin-binning of the night, for recalled flanker Jake Abbott, was rapidly followed by Quins' first try.

England scrum-half Care took a neat inside pass to power his way under the posts from 35 yards out, Evans converting.

And, when hooker Ed Shervington also collected a yellow card, this time it was England prop Marler who crashed over three minutes before the break, Evans again adding the points.

Having started the second half 20-6 down, Warriors were still a man light when Quins scored again at the start of the second half through hooker Buchanan, before Evans added his third successful conversion.

With Josh Matavesi their third man in the sin bin, it did not take long before full-back Brown completed the visitors' bonus-point victory.

Long overdue late pressure from Dean Ryan's reshaped home side brought a couple of half breaks and the award of that penalty try, after Quins had been the ones reduced to 14 men, Mark Lambert's sin-binning proving the fourth yellow card of the night handed out by referee Wayne Barnes.

But Quins' second win of the campaign was already a foregone conclusion, Ben Botica's last-minute penalty rubbing it in. And an unnervingly quiet, disappointing home crowd of 7,269 were streaming away well before the end, sensing that this is going to be a long winter at Sixways.

"The scoreline was a true reflection. Let's not try to dress it up. We were well beaten within 50 minutes. We can't cope with that intensity.

"We didn't have an answer to their offloading game and, when you are under that much stress, something is going to give. We went down to 14 men and it just gets harder and harder.

"In the second half we showed an awful lot of courage and worked really hard to try to stay in the game, but we were second tonight by some distance. That was a top-of-the-table side that found some form tonight. It was as sharp as I have seen them for a while."

"I love watching them play rugby when they play like that, and anyone who doesn't shouldn't be watching rugby. We put a marker down tonight.

"I was really pleased with the way we played, the way we went about things.

"Worcester won six out of seven games here under lights last season. It is not an easy place to come."