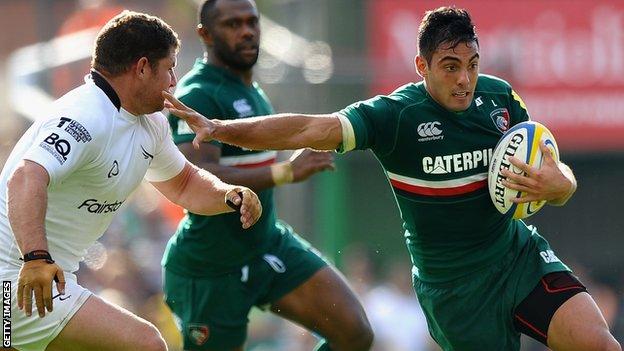 Leicester Tigers ensured there was no happy return to Welford Road for Newcastle Falcons coach Dean Richards with a convincing victory.

Toby Flood scored four points with the boot against his former club, with Owen Williams landing the other.

Rory Clegg kicked one penalty and one drop goal for the Falcons.

Falcons director of rugby Richards made more than 300 appearances for Leicester as a player and won Premierships and Heineken Cups as coach before his departure in 2004.

Newcastle's last and sole victory at Welford Road came in 1997, a match that marked their current boss' final outing for Tigers, and once they were 12-0 down inside quarter-of-an-hour, it appeared likely their winless run in the midlands would continue for another season.

Crane got the first, streaking in after considerable Leicester pressure, and lock Kitchener got the second after Tuilagi, one of three returning England stars with Flood and Ben Youngs, drove through a string of tacklers before feeding Kitchener for a simple score.

Clegg pulled three points back for Newcastle from the tee, and dropped a goal following Dominic Barrow's drive but Tuiliagi was again provider when he put American full-back Scully in to give the home side a 17-6 lead.

Vereniki Goneva was denied a further Leicester try by the referee for a forward pass, but Dan Bowden eventually crashed over to make it 24-6 and when Thomas Waldron added a fifth from a line-out and drive, Leicester coasted home.

The visitors rallied as Tigers reduced their intensity, and despite Adam Thompstone's sin-binning for a deliberate knock on, were unable to score the try their efforts perhaps warranted.

"The break Manu Tuiliagi made for [Graham] Kitchener's try was outstanding. It shows how immense he can be, and how strong he is. It was his first game since the Lions, he got through 75 minutes and showed how important he is to our team. He got cramp at the end and we took him off as a precaution.

"You know what he brings to the table, he is a very aggressive player. He will admit he was a bit rusty at times but it was his first hit-out and he will be better for that performance.

"There are not many players in world rugby who can do what Manu does. He is very important to our team and it's important we get him up to speed. We have got a big six weeks coming up."

"We came here with a lot of young boys who did not have the experience Leicester have. If you look at their starting line-up and their bench, it's not a bad squad, is it? We came here with no worries and there were positives to come out of it.

"Players like Dom Barrow, Scott Wilson, Joel Hodgson, Will Welch and Mark Wilson have played a reasonable amount of rugby but not always at this level. You could not go anywhere else other than here to gain that experience. It's fantastic.

"I'd still have liked the scoreline to have been reversed and in time it will be. We just need to work on how to do it. We made four clean breaks in the first half and didn't nail them. If you make four clean breaks at Leicester you have to nail them. Had we scored one or two it might have been different but going in at half-time 17-6 down was probably a bit too far away for us, especially with what they had coming off the bench."