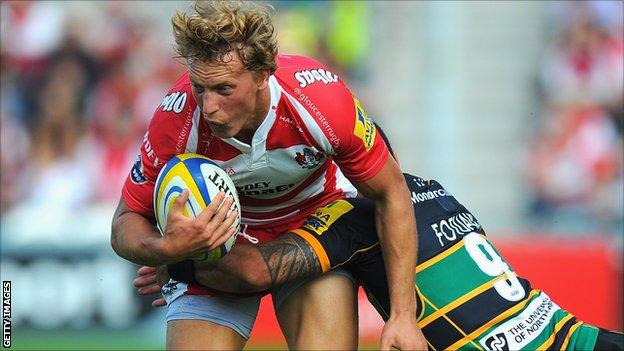 Saints will feel hard done by at losing their 100% record, having led in added time from Jamie Elliott's try, converted by Stephen Myler.

Both sides scored three tries apiece, with Charlie Sharples, Twelvetrees and Elliott Stooke in for the hosts.

Ben Foden and Samu Manoa also crossed for Saints, who missed out on top spot.

There was controversy about the penalty which settled the match, coming as it did in injury time at the end of an absorbing encounter, as referee Martin Fox ruled Saints were offside at the scrum when the ball was out.

It took unbeaten Saints just five minutes to race ahead, a fluid move to the right was polished off by Foden, who cut back on the inside to stroll in.

Relief for Cherry and Whites

Gloucester's win against Northampton ensured they avoided making their worst start to a Premiership season.

Two defeats in two at the start of the season matched the losing start made in 2000-01, but victory put paid to an unwanted statistic and lifted Falcons up to ninth.

Burns' penalty after Saints were penalised for entering the ruck from the side got the Cherry and Whites on the board, although the half-back was unable to repeat the feat from further out minutes later.

The hosts were throwing the ball around nicely, and Trinder should have scored when chasing down Burns' grubber in behind, but he knocked on with the line beckoning.

Sam Dickinson was sin-binned for a tackle on an airborne James Simpson-Daniel, but despite some expansive play the hosts were unable to break through with a man advantage.

Myler's boot pulled Saints ahead from another penalty but Gloucester had the final say of the half with a beautifully worked try from left to right, engineered by Billy Twelvetrees, Burns and Cook and finished off by Sharples under pressure in the corner.

Gloucester continued their momentum after the break and built on the lead when Twelvetrees collected Jimmy Cowan's pass inside and shrugged off a trio of tackles to force his way over.

Saints responded immediately, burrowing their way in from a rolling maul through Samu Manoa and Myler was on target to again establish the lead and could have edged further ahead had Wales winger George North not been denied a certain try by Charlie Sharples after an overlap appeared on the left.

Burns kicked Gloucester back ahead from another penalty, and they punished the Saints further when James Simpson-Daniel danced through the line and offloaded to Stooke for a try that lifted the Shed.

Saints rallied, looking for the power of their pack to dominate the hosts, but it was a powerful run from their summer import North that created the platform for a magnificent score that was finished off by Elliott, and once Myler knocked the simple conversion over it look as though there was no time for Gloucester to respond.

Not so, as Saints conceded a penalty at a third scrum with two minutes over normal time and Twelvetrees stayed calm to land the kick and seal the points.

"I do think we deserved to win and I thought we played good rugby for big patches of that game. We had a couple of chances in the first half that we didn't take, but we said at half time that just have to keep on believing and doing what we're doing and things would come for us.

"Elliot Stooke is a twenty-year-old guy who has just come off the back of playing in the Under-20s World Cup and I thought he was outstanding. The boys are relieved; it's been a tough couple of weeks for us. We've had to take a few knocks which is understandable but we kept our focus, belief in what we were doing and we played with confidence.

"The one thing I spoke about leading into this match was that we've got to believe in ourselves and play with confidence."

"It is a shame when games are decided by the referee in the last couple of minutes. We were disappointed when we had the change of referee at short notice, but sometimes that happens. What we have got to make sure of is that we control what we can control. The refs are out of our hands.

"We've got to make sure that parts of our game we are more accurate with. You have got to try to put the referee out of the equation. My reading of the scrum at the end, particularly the second scrum, was that we had control of the ball, so the reset should have been our put-in. I don't want to say any more, really.

"I have taken my frustration out - I kicked whatever was at the side of the pitch. We came close, we will win some and we will lose some. Clearly, the penalty count didn't go in our favour."