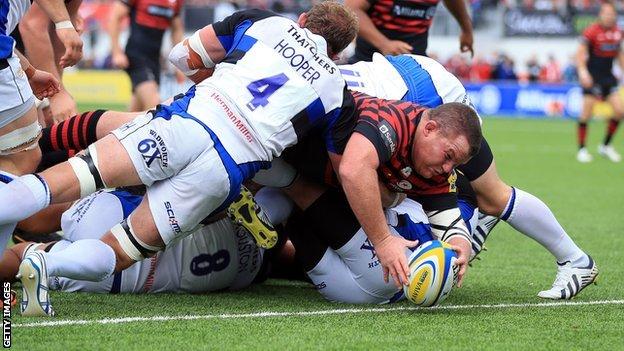 Saracens produced a stunning first-half display to beat Bath and maintain their 100% start to the Premiership season.

Tries from Alex Goode and Matt Stevens, and two from David Strettle - all converted by Farrell - secured the hosts a bonus point by half-time.

Bath's Semesa Rokoduguni and Dave Attwood crossed after the break, George Ford converting, but it was not enough.

The visitors made six changes to the team that beat champions Leicester last week and looked out of sorts as Sarries powered through the first 40 minutes to guarantee their third successive five-point haul in three matches.

Strettle was the first to cross, aided by Mako Vunipola's charge upfield, and 10 minutes later England full-back Goode had doubled the try-tally on his return from injury.

Bath's troubles continued as they saw hooker Rob Webber sin-binned for killing the ball, before their former prop Stevens pushed himself through the middle of the breakdown from close range to score the third try.

Strettle then added his second in first-half injury time to post the bonus point by the interval.

The visitors improved significantly after the restart, and got their first try when Rokoduguni leapt on a poor pass by Goode and ran over.

Chris Ashton produced a try-saving tackle on substitute Ford with five minutes remaining, but Saracens were unable to prevent Attwood from crossing late on.

"Our attacking system is different, we made a big change in the summer.

"We had a system that was in place for three years that we felt in the summer was handicapping some of the players we have.

"We were looking for something which got our good ball carriers on the ball more often. It's much more flexible.

"It's a work in progress, we're nowhere near where we want to be with it, but you can see often Schalk Brits and the two Vunipolas got their hands on the ball."

"You have to be deep inside our camp to understand what we're trying to do.

"There was a plan behind it. You don't throw any game.

"It wasn't great. We were blown away in the first half, Saracens squeezed us really well and we compounded one or two things. They played really well."