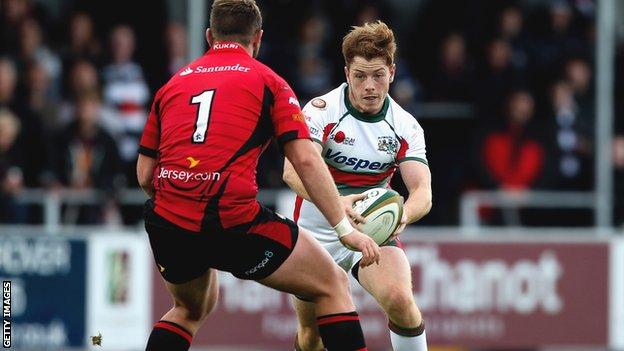 Plymouth Albion fly-half Dan Mugford says the club's exciting backline talent can make the difference in the Championship this season.

Albion made a winning start against Jersey on Sunday, with full-back Chris Elder and winger Tom Bowen notching up three tries between them.

"We've got some serious pace in our back three," he told BBC Spotlight.

"If you give them the ball in a bit of space, they'll beat people. There's a change in the brand of rugby here."

We want to play with pace

In addition to the likes of Elder and Bowen, the Albion backline contains Pale Nonu, the brother of All Blacks star Ma'a, who provides a huge physical presence at centre.

Plymouth showed some real ambition at Exeter Chiefs' Sandy Park, despite difficult weather conditions, and Mugford is hoping the display will set the template for the rest of the season.

"Getting the win means everything," said Mugford, who ended the game with 16 points and a 100% kicking record.

"For us to get the win on the board early doors really gives us a kick to push on. It's about bonding us together and getting us playing the rugby we want to, and giving us the confidence to execute it.

"You could see in the second half as we got more confident we started to open up."

Albion player-coach James Shanahan agreed that the team had impressed with ball in hand.

"I wasn't wasn't delighted at half-time. We tried to force the game and made too many errors," he said.

"But in the second half we looked after the ball and played with some tempo - it was a great win.

"That's the way we want to play, with pace and moving the ball around."