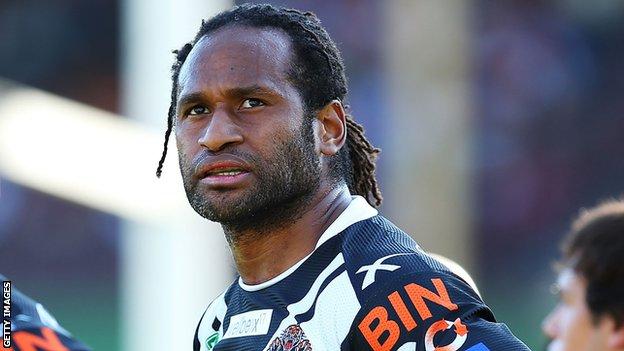 Leinster have lured former Wallabies star Lote Tuqiri back to rugby union on a short-term deal.

Fijian-born Tuqiri, 33, has represented Australia in both codes, most recently the rugby league team after leaving Premiership club Leicester in 2010.

He first moved to the union code in 2003 and starred in the World Cup later that year, scoring a try in the defeat to England in the final.

He worked with Leinster's new coach Matt O'Connor while at Leicester.

O'Connor said the Irish province is "delighted to welcome a player of Lote's calibre and enthusiasm".

"A consummate professional, Lote has an enormous wealth of experience in the game and we believe he will play an important role in the squad over the coming weeks," he added.

Leinster have not specified how long Tuqiri will be staying with the club.

Tuqiri played for the NSW Waratahs between 2003 and 2008 and won 67 caps for the Australian Wallabies - including at a second World Cup in France in 2007 - before opting to join Leicester.

He was then tempted back to Australian rugby league in 2010 by West Tigers and once again went on to play for his country.