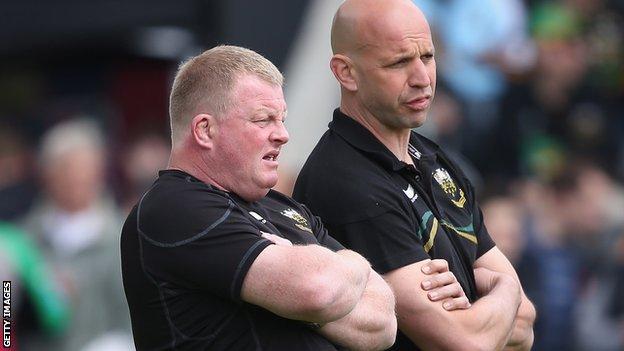 The Saints lost Brian Mujati and Soane Tonga'uiha in the summer, but signed Alex Corbisiero, Gareth Denman and Salesi Ma'afu.

"There are no excuses when we've got everyone to pick from - it's a very difficult selection," forwards coach West told BBC Radio Northampton.

With a guy like Alex Corbisiero he's definitely made the pack stronger. He's slotted in, playing like he's been playing here for years

"The goal is to avoid burnout. We've got some real quality up front."

"He played well against Exeter and then he was disappointed that he wasn't playing against Harlequins. We've got good players and we need to get the best out of all of them.

"We've got some big games in the Heineken Cup coming up and you need to make sure everyone's played enough rugby at the right level."

The arrival of British and Irish Lions prop Corbisiero has bolstered the Saints front row following the departures of Mujati and Tonga'uiha, and Denman and Ma'afu have also added strength in depth to last season's Premiership finalists' squad.

Prop Tom Mercey says that he has seen a positive improvement in the Saints side since Corbisiero's introduction into the first team in particular.

"With a guy like Corbisiero he's definitely made the pack stronger," he told BBC Radio Northampton.

"He's slotted in, playing like he's been playing here for years. Certainly from a pack perspective, playing with a guy of that quality is fantastic.

"You look at the whole of our squad and any one of us is good enough to play.

"If at any point you become complacent you know that someone's going to come in tomorrow and take your position. You have to respect everyone, play your best at training and then ultimately it's out of your hands and it's down to the coaches to pick the side."