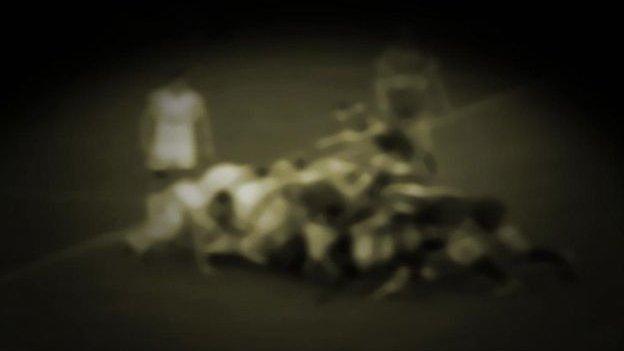 At least two players at every club in Scottish rugby's top tiers of the amateur game use banned substances, a young player claims.

The claim comes in the wake of Melrose back Sam Chalmers receiving a two-year ban for taking steroids.

The Scottish Rugby Union says any evidence of drug use should be brought to its attention.

The player, who we have not identified, has not used drugs but says youngsters are being pressured to "bulk up".

He alleges that drug misuse is occurring in Premiership, National League and Championship A and B clubs.

They need to get big and strong and it far outweighs the skill part, but I just find it hard to believe that on average two players per club are taking steroids

When questioned, the 19-year-old, who plays for a Scottish National League side, told BBC Scotland about the extent of the problem.

"Lower leagues? I would say roughly two people per team are on some sort of substances, could be fat-stripping supplement or a bulking supplement or something like that. From the Premiership to the Championship." he said.

When asked about his evidence, he said: "When people go off-season and they bulk up and you think 'that's not right', you hear people chatting that they're on something or there's other signs as well.

"They have more spots and stuff like that; there's tell-tale signs when you're taking substances like that.

"You kinda bulk up quickly, it's almost like a quick-fix because they want to be like a professional so they want to get there as quick as they can.

"They don't really care what they do to their health. They just want to be there to be the best they possibly can.

"You see guys who are getting picked, they're not the most skilful players, but they're huge and you think, 'that's the only reason you're picking them, because they're big'."

Former British Lion prop forward Peter Wright believes the pressure on young players to "bulk up" has increased but has not witnessed any steroid taking.

"They need to get big and strong and it far outweighs the skill part, but I haven't seen it in the game myself.

Since the 2009-2010 season, there have been around 800 drugs tests in Scottish Rugby, at all levels of the game and, in that period, there have now been two adverse findings

"I try to get pretty close to the players to find out about them and, while most of them are probably taking supplements of some sort, I just find it hard to believe that on average two players per club are taking steroids.

"People might take the gamble that they can do it and not get caught, but I feel there's enough information out there and, although some might be naive, they might just use that as a excuse when they get caught."

"We are committed to keeping the game in Scotland clean through a programme of robust drugs-testing coupled with education on the dangers of illegal substances," said a spokesman.

"Scottish Rugby, working in partnership with anti-doping agencies and other governing bodies, undertakes a programme of drugs-testing after-matches, after training, out of competition and at home.

"Testing can occur at any level of the game, anywhere and at any time.

"Since the 2009-2010 season, there have been around 800 drugs tests in Scottish Rugby, at all levels of the game and, in that period, there have now been two adverse findings - an amateur club player in 2010 who was found to have taken a slimming product that contained an illegal substance and, this latest case, involving a club player who took a product because he naively thought it could help him to put on weight.

"We are continuing to work diligently to ensure the importance of a drugs-free game is understood by all involved in the sport in Scotland.

"Scottish Rugby discourages the use of nutritional supplements in players under the age of 18 and encourages healthy eating."