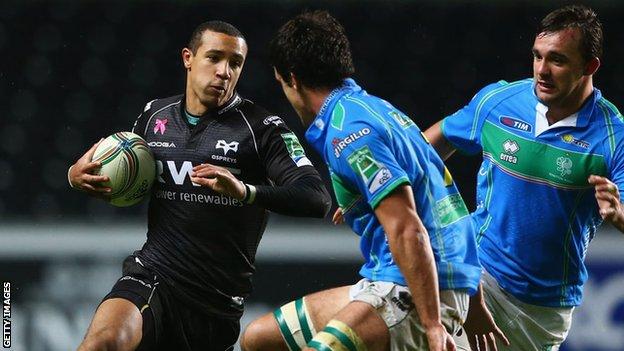 Eli Walker is happy to be back in action after the most frustrating six months of his life.

The Ospreys wing, 20, was tipped to win his first cap for Wales after being included in the squad for the 2013 Six Nations Championship.

But a back injury which required surgery meant he missed the tournament and Wales' summer tour of Japan.

"It was frustrating to be honest. It would have been great to get a cap with my mates," said Walker.

"But it wasn't to be, so all I can do is get my head down, play rugby and hopefully another chance will come."

All I can do is get my head down, play rugby and hopefully another chance will come

Walker played in Ospreys' win over Treviso on the opening weekend of the new season and the 29-29 draw against Leinster in Dublin on 14 September.

He is also expected to be in the team to face Edinburgh at the Liberty Stadium on Saturday and the player has a positive attitude after the frustrations of last season.

"I'm feeling great," he said. "The conditioners have done a great job, I've done a lot with them this pre-season.

"I've hit my goals fitness-wise and I'm slowly putting that weight on so things are looking pretty good for the beginning of the season."

Walker's emergence as a Wales squad member came after he took over the number 11 jersey at the Ospreys following the retirement of Shane Williams.

Like Wales' record international try scorer, Walker does not fit the mould of the giant modern wing.

Although he is 6ft he weighs only 13st 1lb and it was his pace and elusiveness that marked him out as an alternative to the power of Wales' Lions pairing of George North and Alex Cuthbert.

However, while he was recuperating during the close season he watched younger Ospreys wing Daf Howells make his debut for Wales in Japan.

Walker said watching that success for his team-mate helped keep him going.

"Daf Howells - how old is he? He could be even two years younger than me - and he's hit the heights already so good on him," said Walker.

"It was frustrating to be honest. It pushes me to get back to fulfil some of my goals when I'm fit."

But he is not setting his sights on a place in the autumn internationals when Wales have matches against South Africa, Argentina, Tonga and Australia.

"I'm trying not to look too far forward, I'm just trying to get good consistent rugby with the Ospreys because before the last two games I hadn't played since February," added Walker.

"It was quite difficult playing not that much - the first two games I've felt a little bit rusty to be honest but it's all about game time, game management and trying to get as much playing time as I can."