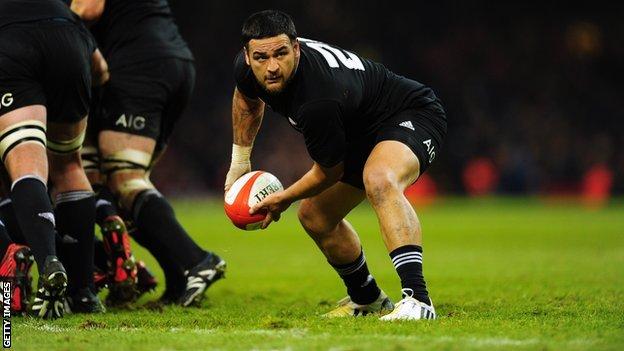 Veteran scrum-half Piri Weepu has been recalled to New Zealand's squad for their final two Rugby Championship Tests in Argentina and South Africa.

Captain Richie McCaw is also included after suffering a knee ligament problem, but is unlikely to be risked for the Pumas clash on 28 September.

Weepu, 30, has not played for the All Blacks since being dropped following the third Test against France in June.

Weepu returns to the touring squad as a replacement for TJ Perenara, who has a stress fracture in his left leg and will be out for six weeks.

All Blacks coach Steve Hansen said: "We have selected Piri as a replacement for two reasons.

"One, given the environments we are going into, it would be unfair to bring in a novice half-back, and secondly, we have also seen advances in his game in the areas we asked him to improve in."

Flanker McCaw looked set to miss the rest of the championship after picking up a knee injury in the All Blacks' 28-13 win over Argentina in Hamilton.

Hansen added: "With Richie, we believe that the best chance of having him available to play against South Africa [in Johannesburg on 5 October] is by having him travel with the squad and getting hands-on treatment from the All Blacks medical staff."

Tom Taylor, who made his All Blacks debut against Australia in Wellington last month, has been included in place of Dan Carter, who has a shoulder injury.