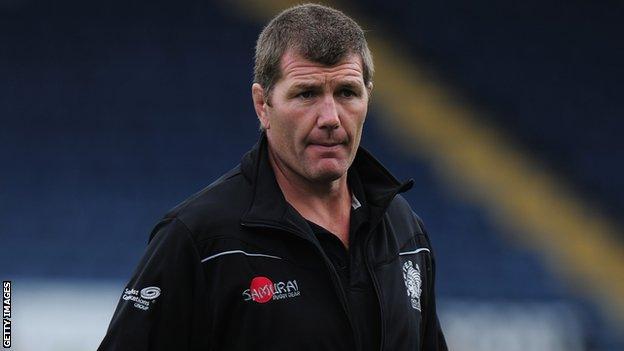 Exeter Chiefs coach Rob Baxter has urged his side to keep level heads in Saturday's game at London Irish.

Baxter is looking to build on last weekend's win over London Wasps, but does not want them to get carried away.

"It was nice to get some points, but we can't get on a rollercoaster," he told BBC Radio Devon.

"We had a really good focus on what we wanted to achieve out of the Wasps game and we've got to make sure we ram that home this weekend."

He continued: "The reality is after the Northampton loss we're not a terrible side, then after the Wasps win we're not suddenly a fantastic side.

"There are some positives, but what we have to do is focus on what we did well last weekend, what we need to do keep doing and improving on because we did concede a couple of late tries and we did blow a couple of chances."

Exeter must manage without Dave Ewers, who has a hamstring problem, so Ben White will make his first start of the season.