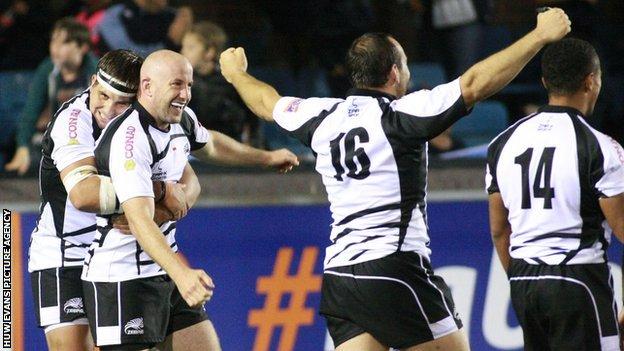 Director of rugby Phil Davies was rueful after his Cardiff Blues side became the first team to lose to Zebre.

The Italians, formed in 2012, claimed their first Pro12 victory in 25 attempts with a on Friday night.

"Very, very disappointing and that's an understatement really... it's a tough one to swallow this," Davies said.

"We won everywhere but on the most important place, which was the scoreboard."

Davies said he was happy with the effort and commitment of his players but was frustrated by the Blues' inability to turn pressure into points.

"In terms of percentages - 60% of the territory and possession I think it was in our favour," Davies said.

"It doesn't count for much unless you convert your opportunities.

But when Dario Chistolini was called back on to complete the front row for a scrum no other player left the field to make way for that crucial passage of play, although Davies refused to use that as an excuse.

"They did, yeah [still have 15 players on the pitch]. I didn't see it but someone told me after as I was walking down the tunnel... it doesn't really [change the result] in that regard," said Davies.

"We're growing and developing what we're doing and it'll get better, that's for sure.

"We're still a work in progress but it's frustrating losing games like this, but I'm not questioning what I'm doing.

"That's not my decision at the end of the day, my decision is to get on with it and do what I'm doing, and that's what I'll continue to do."