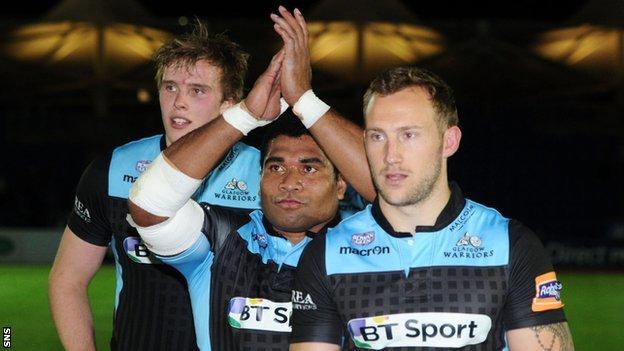 Gregor Townsend has urged his Glasgow Warriors team to maintain their momentum after claiming a third Pro12 victory out of three.

to move top of the league.

"We've played the best two teams in the league in round two and round three and we've managed to get wins," Townsend told BBC Radio Scotland.

"But it's very important we back it up with a win against Zebre next week."

Chris Fusaro and then Jerry Yanuyanutawa crossed for Glasgow as they beat Leinster for the first time in eight attempts.

"What a performance, especially the last 60 minutes of the game," said Townsend.

"Second half, we dominated territory and possession and were knocking on the line for so long and it was great to see that try off the driven line-out. I'm really proud of the team.

"It's a credit to the players. We got in a rhythm defensively. If you've got such an aggressive defence it forces teams to kick, which gives you better counter-attack ball and also gets penalties.

"We've defended really well and that's the third game now we've not conceded a try. The effort and the desire to put the tackles in is the first part of a defence and the players have got that.

"We were playing against one of the best teams around. Before tonight they had only lost once in 20 games so you've got to play at your best to beat these teams and we certainly were at our best in the second half."

"He's waited for this start for 11 months and it was so great to see him play so well and the team responding to his leadership as well," added Townsend.